Julia Ashley had qualified to compete in both the 400m and 800m at the prestigious NJSIAA Track and Field Meet of Champions on Saturday.

But because the rest between these events is so short and the level of competition so intense, the Verona High School senior decided to compete in only the 400m and not the 800m. She came away with fourth place overall in the 400m in a blistering time of 56.95, breaking her most recent school record. Sydney McLaughlin, the Union Catholic sophomore who won the 400m, did so with the fastest high school time in the country, a 53.72.

Ashley’s younger sister Maggie Ashley had her personal best in the 400m race at 60.55 which was the second fastest 400m run by any ninth grader in New Jersey this year. The 4 x 400m relay team of Maggie Ashley, Angel Barkley, Jess Williams and Julia Ashley finished in 4:10.9, which was the best of the small Group 1 schools in New Jersey at the Meet of Champions. The Meet of Champions represents the very best of the 320 teams throughout the state that compete in winter track.

The winter track season isn’t over yet for Verona. Julia Ashley has qualified to compete at the Eastern States Championships in both the 400m and 800m at the New York Armory on March 3. 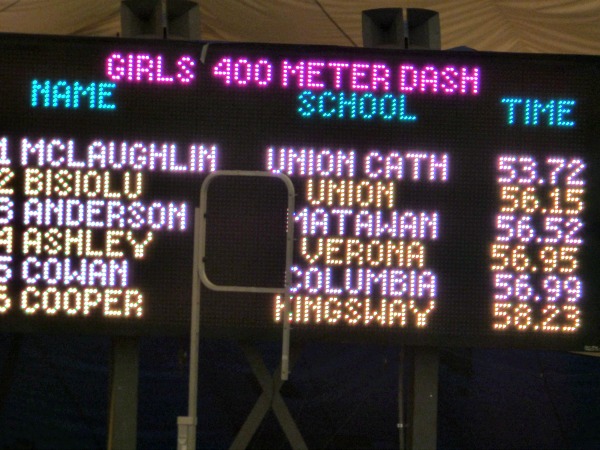