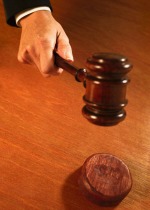 For the second time this year, the Essex County Prosecutor’s Office has been unable to win a conviction in the killing of Verona gas station attendant Daniel Pritchard in February 2009.

After 10 days of deliberations, jurors hearing the case against Raymond Perry, the man accused of shooting Pritchard, told the judge today that they were unable to come to a unanimous decision.

Though prosecutors appeared able to connect both the gun used in the killing and Pritchard’s cell phone to Perry (who now uses the name Tariq Kyam), the case has been difficult. As in the spring trial, prosecutors relied on the testimony of his cousin and co-defendant, David Fate, who pleaded guilty in 2011 to his role in the pair’s crime spree. Fate got a 28-year prison sentence in exchange for his testimony. But Fate’s testimony has been inconsistent and Perry’s lawyer had accused Fate of lying.

There is a status hearing on the case on January 12. You can read the Star Ledger‘s report on the verdict here.

The Verona Fire Department will be driving Santa around the streets of Verona on Sunday, December 11. VFD members...