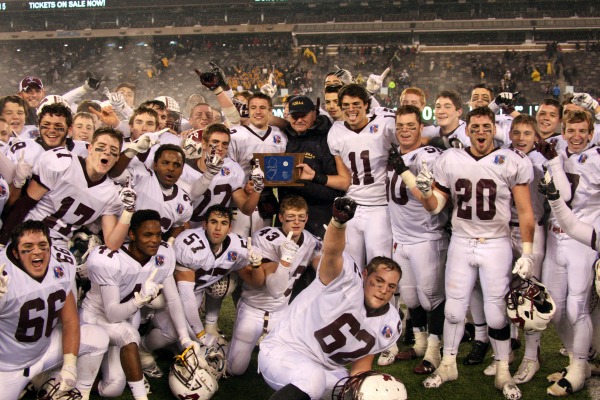 For four years, the seniors on Verona High School’s football team have had a goal: To win a state championship. On Friday night, after a thorough 20-0 defeat of top-seeded Cresskill High School in the North Jersey Section 1, Group 1 final at MetLife Stadium, they could finally make a resounding declaration of Mission Accomplished.

“It’s something that you dream of as a little kid,” said quarterback Frank Ferrari. “With my brother and my teammates it’s been a goal all four years. It’s something real, real special.”

“This year has meant the world to us,” added his brother Bill Ferrari, who willed his way back from a broken arm early in the season to play in the championship. “Each week, we kept saying ‘we’re a good team’, then ‘we’re a great team’. And now we’re the best team ever.”

And that’s no exaggeration. The 2014 Hillbillies go down in the record books as the only undefeated team in the 75 years of Verona High School football.

Cheered on by a large crowd that was probably the cause of the three-mile backup on route 46 east, the Hillbillies set the tone from their first possession as they turned a 74-yard drive into their first of three touchdowns. Frank Ferrari, who is on the roster at 6’1″, seemed to stretch to 7’1″ as he drove the ball into the end zone.

A Jimmie Crawford touchdown, and another solid kick from Colin Kiernan, put the game at 14-0 at the half. Ferrari would score again in the third quarter and then paid back Cresskill for its two interceptions by snagging a Sean Kelly pass for himself.

Verona’s offensive line–led by seniors Matt Riccitelli, Mike Cifaretto and Sam Cummings–shut down drive after drive by the Cougars: Cresskill had just six first downs in the entire game. “It’s been at least four years in the making,” said Matt Riccitelli. “From the sprints and the weight room, and everything we’ve done in practice. We wanted to be the best and you have to practice to be the best.”

The name Matt seemed to be on the loudspeaker at every play, from tackles by Riccitelli and Matt Zaccone to the relentless field work by Matt Intili. (To be fair, Cresskill’s lead player was also named Matt, and senior linebacker Matt Ferrara made sure the Hillbillies felt his presence.) “It was a whole team effort last night from everyone,” said Riccitelli. “I love the fact that we are bringing the championship home, and I am really proud that our fans were behind us the whole year.”

“It was great to go a out like this,” said Frank Ferrari on Friday night, “But I will miss it tomorrow. I will miss it and I want to be back on the field.”