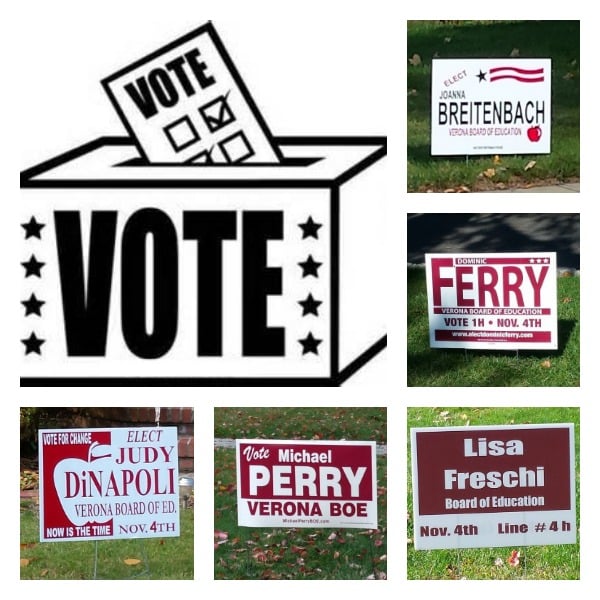 The polls open at 6 a.m. Tuesday morning for an election to fill one seat on the Verona Board of Education and to make decisions on county and federal office holders.

In Verona, five candidates are running for one open seat on the Board of Education: Joanna Breitenbach, Judy DiNapoli, Dominic Ferry, Lisa Freschi and Michael Perry. All five participated in a forum sponsored by the Conference of SCAs in October and, if you haven’t yet made your voting decision, you can watch them in the video below.

In Essex County, Joseph N. DiVincenzo Jr. is seeking his fourth term as county executive, a race in which the Republicans are running Peter H. Tanella, a member of the Town Council in Cedar Grove since 2005. Leonard M. Luciano is also seeking re-election as freeholder for the 4th district, which encompasses Verona. His opponent is Richard N. Leonard, a councilman from Roseland. Luciano made headlines in March 2013 when he crashed his car while texting in Roseland. There are four seats to be filled for the freeholders at large, but there has been little campaigning by any of the incumbents or challengers.

At the federal level, New Jerseyans have a Senate race between Democrat Cory Booker, who was elected to the Senate in 2013 after Frank Lautenberg’s death, and Jeff Bell, a Republican who is a Vietnam veteran and economist. In the House of Representatives race, voters get to choose between long-time 11th district office holder Rodney P. Frelinghuysen and Democratic challenger Mark Dunec, a Livingston resident who is a management consultant.

The polls are open until 8 p.m. Tuesday and all Verona public schools will be on a half-day schedule.