Last Sunday the two top teams from each division met at Centennial Field. When the final whistle blew, the score was tied 14-14, further driving home how close the teams are. There is a strong possibility that these same two teams could meet again in the Super Bowl, only this time the game won’t end in a tie.

As it typically does, the Eagle D set the tone early as PJ “Don’t Call Me Peter” Jordan sacked the Chiefs quarterback to force a punt. However the Chiefs tried a fake punt and when the pass fell incomplete the Eagle’s O was in great shape taking over on the Caldwell 37 yard line.

Nick Riggio first ran 30 yards down to the 9 yard line. Then from the 9 yard line he did a spin move, bounced it to the outside and tight-roped his way into the end zone for the score. The point after was no good and with 5:32 left in the first quarter the Eagles lead was 6-0.

A huge kickoff return set the Chiefs up deep in Eagles territory and two plays later they were in the end zone. The extra point kick gave the Chiefs an 8-6 lead.

The Eagles could not move the ball on their next possession and were forced to punt from deep in their own end. A bad snap forced punter Anthony Zamloot to scramble out of his own end zone but he was tackled short of the first down.

A few plays later the Chiefs found the end zone to increase their lead to 14-6. Zack Balogh made a huge play by blocking the extra point and the Eagles were still within a score at 14-6. 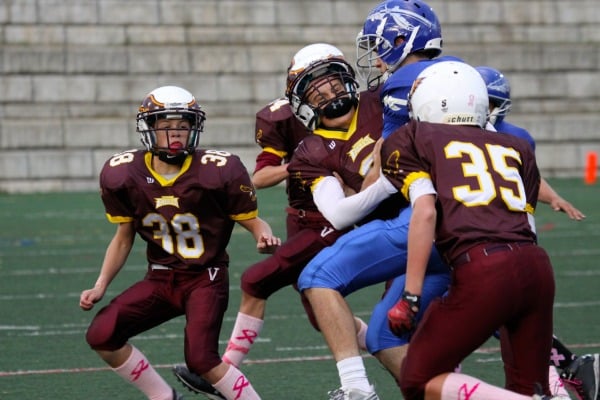 There was no more scoring in the first half but there were some defensive highlights as Big Pat McMurtrie twice made tackles in the Chiefs backfield.

The Eagles needed a lift coming out for the second half and Peter “The Jet” Farley gave them just that. He caught the kickoff on his own twenty, headed up field, cut to the right sideline and outran every Caldwell Chief covering 80 yards for the score. Quarterback Tom “The Toe” Sharkey laced up his kicking shoe and booted the extra point to knot the game at 14-14.

No one would score the rest of the way but several Eagles made great plays. Balogh came up with several tackles as did McMurtrie. Matt Aldiero and PJ Jordan had huge quarterback sacks in the second half. Zamloot, Sharkey, and Matthew Frungillo were also in on a host of tackles.

The Eagles conclude their regular season with a 6-1-1 record and will travel to Nutley to meet the Nutley Raiders on Saturday night at 8 p.m. Bundle up and come support Coach Steve Lupo as he attempts to advance to the semi-finals to play the winner of Livingston and Wayne Black.