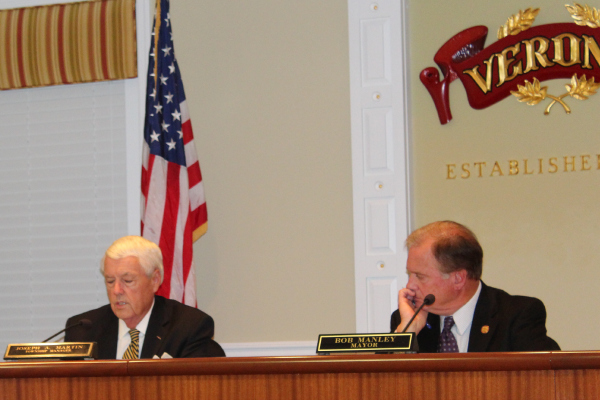 The Verona Planning Board will hold a special meeting in November for the courtesy review of the plan to renovate the lower football field at Verona High School, but that may not be the final word on the project.

Verona Town Manager Joe Martin announced the meeting at last night’s Town Council session and Planning Board members got an email this morning to confirm that the hearing will be on Wednesday, November 12. “The Board of Education’s request for a consistency review appears to be reasonable,” Martin said. He also told the Council that Verona Township Engineer Jim Helb would file an application with the state Department of Environmental Protection to move the sewer line that runs under the field. The pipe is at least 100 years old and the town had been concerned that work on the field could damage it. The Town Council then needs to vote on that application, Martin said, adding, “I’m confident that the governing body will acknowledge his application and it will be sent off to DEP for their review.”

But at three points during his remarks, Martin appeared to indicate that the Planning Board’s involvement might not end with the courtesy review. “If the Planning Board were to do a full-blown review, a lot more information could be needed and would be needed,” Martin said. He did not say under what circumstances that might happen, but noted that the state has “ceded authority to municipalities” on matters of land use. Martin said that he has put the town’s insurance carrier on notice that “there is a more than reasonable chance that we will be a party to some legal action of some type.” A group opposed to the referendum’s implementation that calls itself “Be A Good Neighbor” has been soliciting donations for a legal fund.

The November 12 date represents a significant change in the town’s position from earlier this month. On October 3, when the BOE’s architects dropped off the site plans with Helb, the town engineer indicated that it was not likely that the Planning Board would review the plans until January 22, 2015, a date that would have made it extremely difficult for the BOE to complete the work by the start of school next September. When Martin was questioned about the January date last Tuesday, he told this reporter that Helb said the BOE’s application was “not complete.”

The BOE was finally notified last Wednesday that Helb had deemed the application incomplete. BOE President John Quattrocchi said this morning that the Board’s representatives would be meeting with the town’s today “to understand how he means that.” There may be some clarification at tonight’s BOE meeting, which begins at 8 p.m. in the Verona High School media center.

Since it began developing the field renovation plans, the BOE has maintained that the work needed only to be submitted to municipal planning authorities for a courtesy review, which must be completed within 45 days of the plan’s submission. Under such a review, planning authorities can make suggestions for changes, but school officials are not required to implement them.

The BOE and town followed this process for the extensive construction done under the 2005 referendum. But this summer, a lawyer representing “Be A Good Neighbor” notified the BOE that he believed that the field was not an educational facility eligible for only a courtesy review. Planning Board attorney Greg Mascera has been reviewing the assertion, but has yet to make a recommendation to the Board.

Martin opened his remarks on the Planning Board matter last night by decrying what he called “misinformation” on the subject that had been put out by a Web site. He did not name MyVeronaNJ.com, but MyVeronaNJ.com reported last week that town officials appeared to be holding up the field renovation, which was overwhelmingly approved by voters on March 11. When it was his turn to speak last night, Mayor Bob Manley thanked Martin for his remarks and then said, “be careful what you read on the Internet. You should go to the source,” he added, nodding in Martin’s direction.