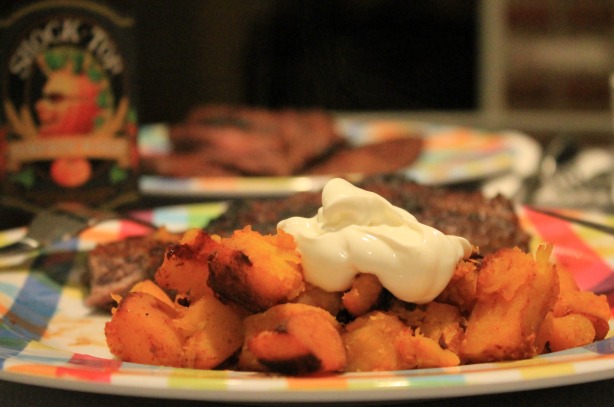 This recipe was a total experiment. I had no idea what the result would be and, often enough, what seems like a good idea in my head doesn’t turn out so well in the kitchen. I’m happy to say that this time, it worked out even better than I expected.  However, when peeling, seeding and cutting a pumpkin is involved, roasting pumpkin may not be something that most people think of for a side dish, especially on a weeknight. So, I made this on a Friday night, took my time, and jumped into a Shock Top pumpkin ale once I was done.

Since starting these recipes, I’ve thought a lot about pumpkin in Mexican cooking. While North Americans seem to be attracted to the sweet side of pumpkin, my feeling is that the savory side shouldn’t be ignored, but it’s not exactly easy to find recipes. So with a little creativity and thinking outside the pumpkin muffin, I tried some spicy roasted pumpkin. It’s an easy side dish, was a fantastic compliment to steak and a little dollop of sour cream or crumbled goat cheese makes it company-worthy.

How to flavor, and what to choose? There are plenty of recipes for spice rubs you can make on your own, but I chose to go the easier route, and turned to a jar. This past spring, I found a company called Spiceologist while surfing through Twitter one night. They were coming to the close of a Kickstarter campaign and as a lover of anything food related, I supported them.

Since then, I have made two purchases of their spice rubs and have been pleasantly surprised by some, and utterly thrilled with others. So… in going with my Mexican-themed food thoughts, I chose to go with the Smoky Honey Habanero spice rub. I thought the flavoring of spicy Habanero peppers mixed with sweet honey granules would be a perfect match to pumpkin’s versatility in both sweet and savory dishes. I was right.

Ingredients:
1/2 of a sugar pumpkin peeled, seeded and cubed (Watch the video below if that thought scares you)
1-2 tablespoons olive oil
1/2 – 1 tablespoon Spiceologist Smoky Honey Habanero spice rub (or any other that you prefer)
Non-stick cooking spray

What’s Next:
Preheat oven to 400 degrees.
Spray an 8 x 11 baking dish with cooking spray (I use olive oil spray)
Place pumpkin in large bowl.
Drizzle olive oil over pumpkin and toss to coat
Sprinkle spice rub over pumpkin and toss to coat. Start with the smaller amount here and then add more after that first toss.
Transfer pumpkin to glass baking dish
Bake for one hour, stirring once after 30 minutes to avoid sticking.
When the pumpkin is done cooking, it should still be semi-firm, but not too mushy. You want some of that more solid consistency when eating.
Top with a spoonful of sour cream and it’s a melt in your mouth bunch of deliciousness.

Typically, when I’m roasting vegetables, I don’t spray the baking dish. But all too often they get stuck, and with my pumpkin I really didn’t want that to happen.  Don’t skip the spray.

If you’re going to go through the trouble of seeding and peeling a pumpkin, use one half for this recipe and save the other half for another, like the Crock It! Pumpkin Tomato Bacon Soup.