Facebook
Twitter
Pinterest
WhatsApp
- Advertisement -
Verona High School honored its AP scholars last week and one thing was very clear: The ceremony is rapidly outgrowing the space set aside for it in the VHS library.

Since 2011, when the Verona Board of Education made it a goal to have more VHS students take advanced placement classes, enrollment has skyrocketed. In his presentation last week, Charlie Miller, Verona’s director of curriculum, noted that just 145 AP exams were given in the 2008-2009 school year. In the most recent year, 402 tests were administered. And that expansion has occurred without any dilution of Verona’s results on the tests. The average AP score was 2.82 in 2009, but 3.05 in 2013-2014. What’s more, the percentage of tests on which students score 3 or better has jumped from 58.6% to 69.4%. VHS now offers AP classes in English literature & composition, U.S. history, government & politics, statistics, English language & composition, calculus AB, calculus BC, European history, biology, chemistry, physics C, Spanish, Chinese, physics B, French, music theory, physics C:EM, psychology and computer science. 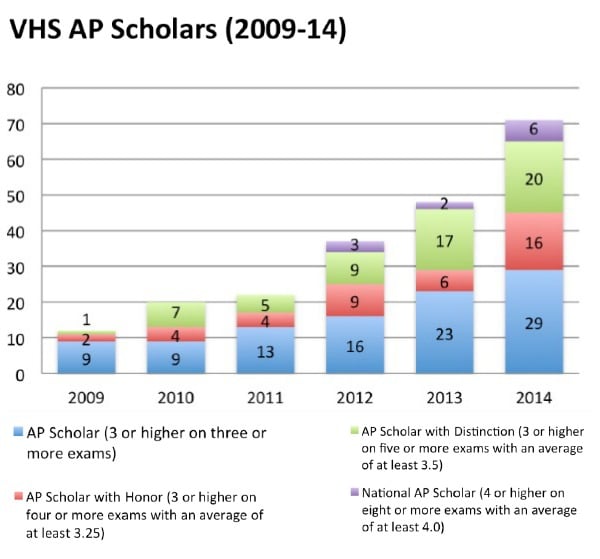 The latter subject has shown the most dramatic growth of any of the AP programs. Only four AP comp sci tests were given in 2009. By last year, the number of tests had ballooned to 48, making VHS first in participation in AP comp sci in the entire state, even ahead of the many tech magnet schools that have popped up in recent years.

Verona’s educators have pushed AP classes for three key reasons: Top colleges value a more demanding course schedule over higher grades in less demanding classes; students taking more AP classes are accepted to more top colleges; and that, with the average cost of “very competitive” and “highly competitive” colleges equal, more Verona students could strive for acceptances at the latter. Many colleges will give college credit for top scores on AP tests, which could cut the cost of college for some families. A student in the class of 2013 received credit for an entire year’s worth of credits when he was accepted at Canada’s McGill University, putting him on a fast track to med school. 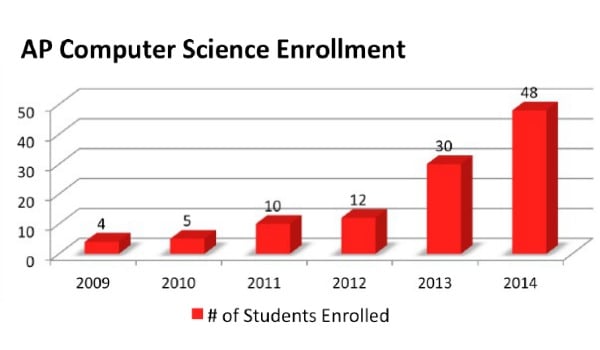 The following students were recognized as AP scholars for the 2013-2014 school year:

National AP Scholar
Granted to students in the United States who receive an average score of at least 4 on all AP Exams taken, and scores of 4 or higher on eight or more of these exams
Matthew Carroll*, Phoebe Chu*, Daniel Li*, Daniel Smillie*, Christopher Sweeney*, Natalie Wertz*