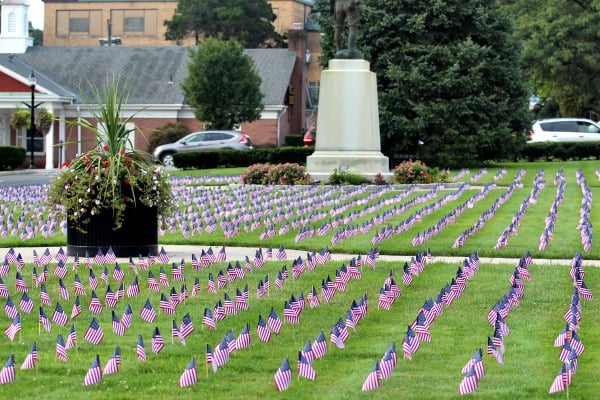 Late last night, while Verona slept, a group of Verona residents put out one flag on the lawn in front of Town Hall for each person who died in the terrorist attacks of September 11, 2001. We thank the more than 40 volunteers who put up the flags and the Public Works employees who volunteered their time to mark out where the flags should be placed.

Verona’s ceremony to remember those who died in the attacks begins at 8:30 a.m. at the 9/11 Memorial near Chase bank. Two Verona residents, William Erwin and Stephen Roach, died in the attacks on the World Trade Center, as did Howard Kestenbaum, a resident of Montclair who worshipped at Congregation Beth Ahm.

UPDATE: In his remarks at the 9/11 commemoration, Mayor Bob Manley spoke of why it remains important to remember the events of that day:

We are together today to remember the events that occurred this day 13 years ago, when extremist terrorists attacked Americans on our very own soil.

There is not a single American who will forget where they were or what they were doing when they first heard of hijacked planes crashing into buildings, and witnessed the horrible devastation that was perpetrated on innocent people.

All of those images and all of those sounds are seared into our memory, and serve to bring us all, as individuals, closer together as a united Nation.

We call upon that sense of unity and our compelling freedom as we honor those who lost their lives on this day13 years.

I spoke here last year on this day of the tragedy that our country endured. I spoke of the ordinary people, going about their ordinary lives, on an ordinary day, who became heroes on what quickly became a very extraordinary and terrifying day.

Service men and women in uniforms as well as civilians: Firefighters and police officers, and all first responders who rushed into burning buildings to save the people trapped inside; The heroic passengers on Flight 93 who fought to retake the plane that later crashed in a field in Pennsylvania, and as a result of their efforts, saved countless more innocent lives.

We honor the memory of those who lost their lives that day – each a friend, father, mother, son, daughter, family member, and coworker; and every one of them missed terribly.

While we remember and mourn those we lost on that day, we must also remember that the September 11 attack on our Nation, affected not only our Nation, but the entire world. It must also be remembered that citizens of more than 90 different countries were among the 2,977 innocent people who were taken from us that day.

We don’t need to be reminded of the horrific events that occurred on September 11, 2001. If you were alive at that time, and of an age to remember, you always will. No reminder is necessary. But it is essential that we do meet, and that we do gather together on this day every year, not just to be reminded of the past, but of what is still occurring now, and what still threatens our freedom in the future.

Ladies and gentlemen, terrorism exists. That is a reality of the times. We are involved in a global fight against an ideology of radical extremism and senseless violence. This is not a new fight. Let this day keep us aware that this fight is ongoing; and it has been since our nation began, as is reflected in the words of Thomas Jefferson who said, “The price of freedom is eternal vigilance.”

Once again ladies, gentlemen and students, thank you all so much for joining us this morning. I am exceedingly proud to be a member of a community that continually bears its soul, and steps up in times of trouble to help and support its people. As you go about your day, please hold in your hearts and in your minds the memory of Stephen Roach and Billy Erwin, two of Verona’s own who were taken from us that day.

God bless Verona, and God bless America
Thank you all 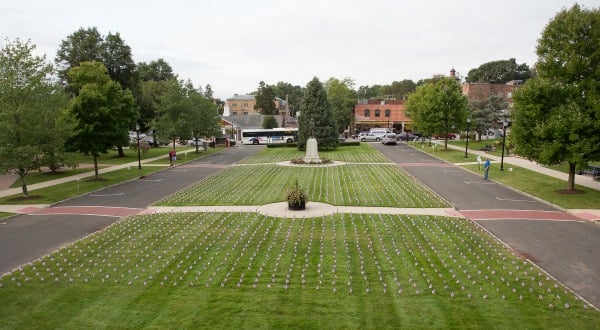