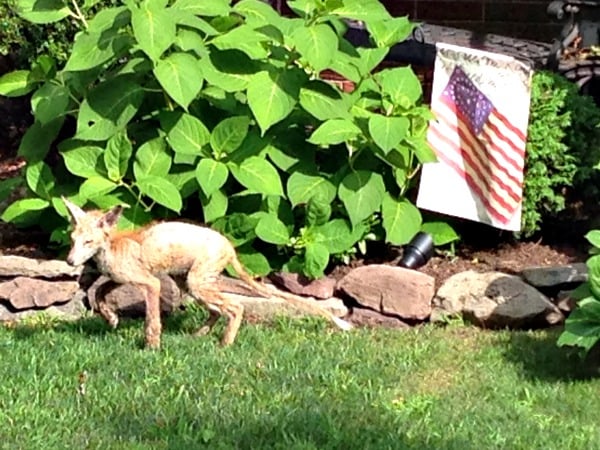 Residents of the Forest section who have been worried about the fox that has been seen on their side of town and their outdoor cats have something new to worry about tonight: a coyote. A Forest homeowner snapped this picture of a coyote in his backyard yesterday.

On its Web site, the New Jersey DEP’s Division of Fish and Wildlife calls this an Eastern coyote and says it can be found in all 21 counties of New Jersey. While coyote sightings are fairly common (we had one in Verona shortly after MyVeronaNJ.com was started in December 2009), attacks on human are rare. Nor is it unusual to seem them in daylight at this time of year. This is when they are out foraging for food to sustain them through the colder months ahead, including rabbits, voles and mice.

But caution is still a good idea. This is a wild animal and not your neighbor’s dog, after all. To limit the coyote’s food options, keep the lids on your garbage cans on tight and don’t feed pets outside. And for the time being, it might be a good idea to keep outdoor cats inside.

UPDATE: Several readers think that, rather than a coyote, this animal might be a fox with a bad case of mange. The parasitic skin disease can cause loss of fur, which could account for a fox losing its bushy tail. We can let nature take its course on this, or call Animal Control, which is handled out of Montclair. The number is 973-744-8600 and they are there Monday-Friday, 8:30 a.m. – 4:30 p.m. At other times, call the non-emergency number for the Verona Police, which is 973-239-5000.