Technology is as important to a modern police force as a gun and a badge–probably more. Yet since 2008, the Verona Police Department has had to deal with a nearly endless list of broken or malfunctioning technology, from radios to their much-vaunted in-car computers. Officers repeatedly made the town’s technology manager and their superiors aware of the problems, and yet they remain unsolved. Tonight, the Town Council may finally learn why the VPD’s complaints went unheeded and what’s going to be done now to fix them.

In early July, the Verona Police Department’s PBA Local 72 took the highly unusual step of hiring a lawyer to file a complaint against the town. In a letter sent to town attorney Michael Gannaio on July 2 by Gina Mendola Longarzo, the lawyer representing the PBA, the police served notice of tech problems that go back six years. Their complaint, a copy of which was obtained by this reporter, details handheld radios that are dead and unusable during emergencies, patrol car video recorders that do not work, and the deliberate disabling of police car computer systems by the town’s IT staff. The complaint says that Jeff Hayes, Verona’s director of IT, and his assistant, Michael McCormack, did not update the users of the computer system, which is known as Info-Cop, forcing current Verona police officers to use the log-in credentials of 18 retired officers. Hayes allegedly impeded efforts by Info-Cop’s support staff to fix the problem, even though Verona pays for that support. 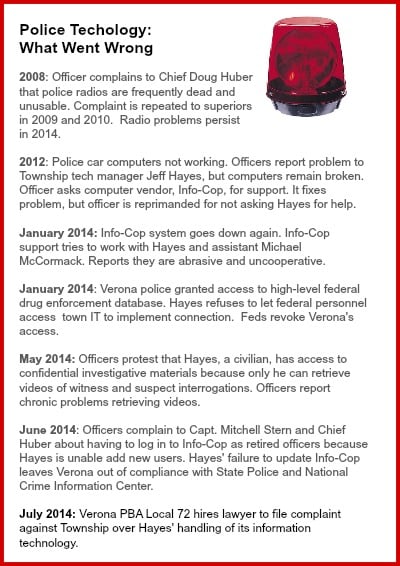 The complaint says that Hayes refused to work with the IT staff of a federal drug interdiction program to give Verona officers access to the High Intensity Drug Trafficking Area database, even though the sale and use of opiates has been a growing concern in town. In addition, the police cannot retrieve videos of witnesses and subjects themselves, but must, the complaint alleges, go through Hayes. Moreover, Hayes, who is not a police officer, has allegedly watched some of these videos, including one concerning the sexual abuse of a child.

These problems may be resolved by an agreement that has apparently been reached between the town and the PBA over how police department technology will be handled in the future, an agreement that will be presented to the Town Council tonight in closed session. But one allegation may be harder to quell: That Township Manager Joseph A. Martin threatened the police officers who turned their concerns into a legal matter.

On two occasions since the complaint was filed, Martin has referred to the complaint as “innocuous” in conversations with this reporter. (MyVeronaNJ.com filed an Open Public Records Act request to get the complaint, but was told it was “privileged” lawyer-to-lawyer conversation.) But behind the scenes, the complaint appears to have been viewed as anything but. An officer who reached out to Info-Cop in 2012 for help after it stopped working was reprimanded for not going through Hayes, even though Hayes had known about the problem and not resolved it. The complaint goes on to say that:

“…when Town Manager Joseph Martin recently learned that the Local had retained counsel to address these issues, he began a campaign of intimidation tactics and has threaded the Local and its members and advised them to ‘fire’ the undersigned or face dire consequences.”

PBA officials have declined requests to be interviewed for this story. But if the accusation of intimidation is true, it would not be the first against Martin. Last September, Martin agreed to mediation after Town Council member Michael Nochimson filed a criminal complaint against him over a threatening late-night phone call earlier in the year. As part of the mediation in that case, Martin agreed to abide by the good-conduct rules of a professional association for town managers.

“Clearly,” the police complaint states, “the Town needs to take immediate action to control all such erratic, unprofessional and unlawful behavior, which constitutes union-busting and CEPA violations.” CEPA stands for the Conscientious Employee Protection Act, a New Jersey law that protects employees from retaliation from a supervisor when they disclose actions that are in violation of a law, fraudulent or criminal. “Bullying is a violation of the town manager’s code of conduct,” said Councilman Michael Nochimson. “The reason for the PBA letter is that something was wrong for a long time and nobody was listening to the police officers.”

In addition to notifying Hayes about the problems, the police had, according to the complaint, brought them to the attention of their chief, Doug Huber and captain, Mitchell Stern. It is not known from the complaint whether Hayes, Huber or Stern shared those concerns with Martin, or what steps they may have taken to resolve them. Hayes and Huber both have offices in Town Hall next to Martin, who told this reporter that he has meets “informally” with all department heads weekly and has an “open-door policy” with town employees.

- Advertisement -
“Mr. Martin has always had an excellent relationship with the police department, so the letter was a surprise,” said Councilman Jay Sniatkowski. “Moreso because the manager’s door is 6 feet from the police department.” “However,” he continued, if you’re not made aware there is a problem then how are you supposed to fix it?”

The agreement between the PBA and the town will likely remove police technology from civilian hands; all of the equipment has support from its vendors. It is not known what impact it will have on Hayes, who has been a town employee since 2003. Two weeks ago, Martin told MyVeronaNJ.com that no town employees has been issued a so-called Rice Notice, which is required if matters concerning an employee are to be discussed in public.

Neither Mayor Bob Manley nor Councilman Frank Sapienza responded to a request for comment for this story. [Editor’s note: Both indicated Monday night that they had not received the emails sent last week to their personal addresses. They are now following the town attorney’s recommendation to decline comment until this matter is resolved.] Councilman Kevin Ryan indicated that, regardless of what is disclosed tonight, he may be looking for additional steps. “I look forward to hearing the report of the town attorney,” said Ryan. “I have not yet decided whether there needs to be an independent audit of how technology is used in Verona.”

The Town Council meeting starts at 7 p.m. tonight in the Council chambers on the second floor of Town Hall. The main session is open to the public.