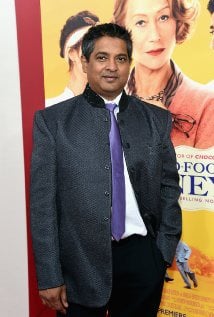 There’s a new movie opening tonight called The Hundred-Foot Journey. The story, which is set in the south of France, revolves around a demanding female French chef and an immigrant Indian family that wants to open a restaurant in the same small village.

What does any of this have to do with Verona, you ask? Well, it turns out that the food in the movie was created by one of Verona’s celebrity chefs, Floyd Cardoz. He was born in the south of India, apprenticed in a Bombay hotel, and has cooked both French and Indian food in Switzerland, New York and in front of lots of TV cameras.

When The Hundred-Foot Journey first came out as a book in 2011, its author Richard Morais was dining at Tabla, the restaurant that Cardoz ran then in New York City. Morais had spent many years working at Forbes, which was headquartered nearby, and had unwittingly created in the book’s lead character, Hassan Haji, a fictional chef that had much in common with the real-life Cardoz. One thing lead to another and then to Hollywood, and Cardoz wound up creating all the food served in the film.

If you want to eat French or Indian after seeing The Hundred-Foot Journey, you could go to Montclair, where the leading French restaurant, Fricasee, is owned by a Verona native, Mark Papera; there are several Indian restaurants there too. But the movie’s creators have created a Pinterest site packed with recipes and dinner party ideas. There’s exotic, like the Vadouvan Naan Bread with Salted Coconut Butter, and a comfy Apple Tarte Tatin.