The Budget That Broke The Camel’s Back? 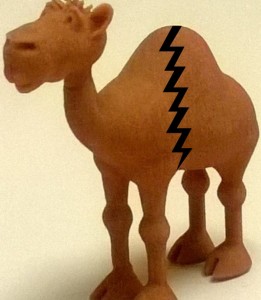 Voting three to two last night, the Verona Town Council approved a 2014 municipal budget that will raise taxes 5.68%. Council members Bob Manley, Frank Sapienza and Jay Sniatkowski voted for the budget, which was trimmed only marginally from the 6.5% increase proposed by Town Manager Joe Martin in April.

But with the vote, three members of the Council sent a signal that next year could be different. “What we have to decide as a town and a community is, what can we afford going forward,” said Sniatkowski. “This community needs to sit back and say ‘can we afford this any more?'”.

Council members Michael Nochimson and Kevin Ryan voted against the tax hike, which will add $166 a year to the taxes on a home assessed at $360,000. Ryan disclosed that he had tried to get fellow Council members to agree to $305,000 in cuts to Martin’s proposed budget, or a 30% reduction; the amended budget trimmed only $123,000, or less than 15%.

“I went through the budget book line by line,” said Ryan, “I felt that we could lose $300,000 from the levy and not put the town in fiscal jeopardy. Department heads would not not be able to carry out their tasks. Obviously my proposal was too extreme.”

The amended budget distributed at the meeting gave only a top-level view of where cuts were made, such as the $20,000 taken from electricity and $25,000 from legal costs. Martin said that, by law, the town could not cut any line more than 10% without restarting the budget process. The budget approved last night cut just $3,000 from the reserve for uncollected taxes (now $1,312,500) even though Martin has previously noted that Verona has a 98% collection rate. It also expanded the surplus to $2,885,000 from $2,850,000; Martin has previously given $2 million as the desired target for Verona’s surplus.

Mayor Manley suggested renaming the surplus something else so that residents did not mistake it for money that was earning interest or waiting to spent in some way. Verona rolls the surplus from one year into the next, ostensibly to contain tax increases. But Al DeOld, who ran unsuccessfully for Town Council last year on a cost-cutting platform, would have none of it. “We’re paying this forward and it puts a burden on all the taxpayers in town,” said DeOld, adding that the surplus has risen from $1.6 million to $2.8 million in the last decade. DeOld, who has been trying to focus the Council on opportunities for budget cuts this year, added that “I could cut six hundred to seven hundred fifty thousand and it would’t cost anybody their job and it wouldn’t reduce service.” Martin thanked DeOld for his efforts, as well as Alex Roman, whose spending cuts he also largely disregarded.

Ryan said that Roman’s observations on the budget needed to be taken “very seriously” in the future. “We are spending at a rate that is higher than the rate of inflation,” he said. “In the long haul, that is not economically sustainable.” In his alternative budget, Roman noted that while Verona’s expenses have risen 29.7% since 2008, inflation is up only 9.75%. Roman’s budget proposal would have raised taxes only 1.3%, without cutting services.

Ryan and Nochimson asked Martin to work harder at reducing overtime and staffing. “We have a systemic problem,” said Nochimson. “We’re assuming that the structure of our town is right. But the only way to reduce costs is to reduce staffing levels and head count.” Nochimson specifically asked Martin to “immediately” stop hiring back retired employees as part-time workers, and to look at outsourcing information technology work instead of paying two full-time staff.

“We need to start looking soon at what services this town needs,” said Sniatkowski, who suggested that that process should begin this summer. “We need to hear back from the community.”