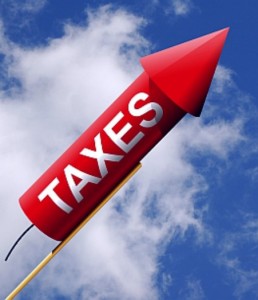 Verona Township Manager Joe Martin has introduced a budget that would raise taxes 6.5%. Alex Roman thinks it should be a lot less, and he’s created an alternate budget to prove it. Roman has identified $833,076 in cuts to the budget, which would limit the tax increase to 1.3% without affecting essentials, like the police or facilities maintenance.

Roman, a resident of Verona since 2005, is the director of technology for a radio broadcasting company, where he develops and manages a budget larger than the town’s. He ran, unsuccessfully, for Town Council last year on a platform for shrinking municipal spending, but he has applauded Martin for his attention to capital investments, like the new 911 emergency system.

Roman’s review of Verona’s budgets since 2008 indicates that we are increasing our expenses at three times the rate of inflation. Verona’s tax levy is up 29.7%, while inflation has risen 9.75%. Municipal debt service is up 42%  over the same period. To Roman, Verona has a problem controlling its expenses, like overtime: Verona uses three times the amount of police overtime as Cedar Grove and he’s seeing an increase in overtime in other departments too. He’s not asking the town to eliminate all overtime, but to start by controlling the increases in it. He’s also concerned that Verona has a surplus of surplus. Martin has often said that the town should have a $2,000,000 surplus yearly. Roman’s analysis puts the surplus at $2,978,376.35 as of December 31, 2013.

The savings in Roman’s budget come from a variety of sources. He would eliminate the increase in overtime in Buildings & Grounds ($25,000 saved), Police ($35,000 saved) and Public Works ($50,000 saved). He would cut reserves on several budget lines, including those for tax appeals ($50,000) and utilities ($30,000). He would cut staffing in what he calls “non-public-facing positions” including a new position in the tax collection office, and would not hire a new library director. Verona has been operating without a library director since November 4, 2013, when the last director left. 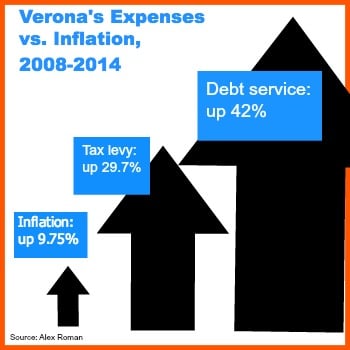 Crunching the numbers on Verona’s budget hasn’t been easy. While Martin did meet with Roman for two hours one Saturday to discuss the budget, the town has yet to respond to Roman’s April 17 Open Public Records Act request for a digital copy of the budget, so he had to resort to typing all the data from the inch-thick paper budget into a spreadsheet himself. And if you’re wondering why anyone is bothering to work on a 2014 budget when the year is almost half over, it’s largely because Verona operates on a calendar year and the state runs on a July 1 fiscal year and we have to wait for the state to get its budget in order before we finalize ours. (The state’s budget is a mess, by the way.)

This morning, Roman emailed a copy of his budget proposal to the five Town Council members, who will vote on Martin’s budget on June 2. Last year, Martin asked for a 2.5% tax levy increase, but the Council pushed for it to be flat. Martin told this reporter yesterday that that was not an option this year. “Absolutely not,” he said. “To not raise the tax levy this year is a flawed approach to long-term budgeting.”

Roman isn’t asking for a flat budget now and says he wouldn’t have asked for it even if he had been able to have input earlier in the year. “I agree that it is difficult to maintain a flat levy this year without substantial changes to operations or cuts to public-facing services,” Roman says. “That is why I left a 1.3% tax increase present in my proposed budget. I believe that is a reasonable middle ground. The reductions proposed are not a short-term fix — they are intended to put the township back on an appropriate financial path while retaining a sizable and well-paid staff, a substantial capital budget, and a healthy reserve fund that meets their stated objectives. If the budget passes as proposed, it will bring us to a 29.7% tax levy increase since 2008, three times the rate of inflation. My proposed budget would bring the 6-year tax increase to 22.9%, still more than twice the rate of inflation. I think the town can operate within the limits of the resources they have available.”