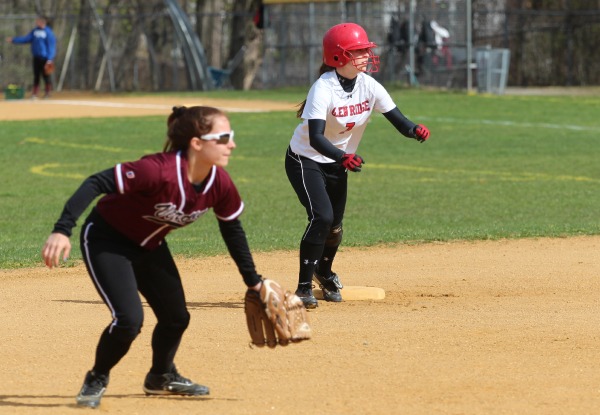 As this year’s Verona High School softball season draws to a close, senior Ellen DiDia seems determined to not let it go quietly. On Wednesday, in one of just two at bats, she slammed out a triple that helped turn the game at Science Park High School into an experiment in how many runs VHS could pile onto one scoreboard: 12, to just one for the Newark team. Ellen DiDia is this week’s Verona Sports Boosters Senior Athlete of the Week.

The Science game was an echo of how the season opened for DiDia, when she had three hits in five at bats in VHS’ first game against Newark Academy. DiDia’s performance then brought Verona within one run of a tie with the hard-to-beat team. The second base player has had her ups and downs since, but the ups have been lovely: When 12th-seeded Verona took on fifth-seeded Glen Ridge in the first round of the Essex County Tournament a week ago, DiDia’s two hits, two RBI and a run factored nicely into Verona’s upset 8-1 win.

Earlier this spring, DiDia shared an upset of a different sort–a worry for the sport she clearly loves. Writing for The Fairviewer, Verona High School’s news site, she expressed concern about declining participation in one of her two favorite sports (the other being VHS volleyball), and wondered whether Verona could “hold on to softball”. DiDia, a three-year starter, will have this to hold on to: 231 at bats for VHS, with 63 hits, 54 runs scored and 29 RBI.

CORRECTION: The Boosters have let us know that there was an error in their research for this piece. DiDia is a four-year softball starter, not three.

Previous article
Bagelwich To Open Early For Band Trip
Next article
Real Estate For May 17-18: Rain Or Shine