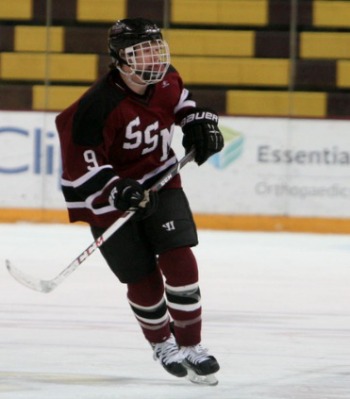 Jacob Paganelli, a former starter on the Verona-Glen Ridge hockey team, has been drafted for the Bloomington Thunder, an expansion team in the United States Hockey League.

Paganelli was a varsity starter for VGR in his freshman year at Verona High School. He then transferred to Shattuck–St. Mary’s, a private boarding school in Minnesota that has become nationally recognized for its training of high school hockey athletes. (Derek Stepan of the New York Rangers and Kyle Okposo of the Islanders are SSM alumni.) The move seems to have paid off handsomely: Paganelli was the No. 55 pick in the draft, even though he is only finishing his junior year.

“I was surprised,” he said on Monday afternoon. “I didn’t expect to be picked that high.” Paganelli credits the time he spent in Verona schools for preparing him for SSM. “When I made the jump I was ready for the school,” he added.

Paganelli must now decide whether to return for his senior year at SSM or move straight on the USHL, which is the top junior hockey league in the U.S. and a frequent pipeline to both Division I college programs and the National Hockey League. According to the USHL, more than 165 of its former players now have NHL contracts. The Bloomington Thunder, based about two hours south of Chicago in Bloomington, Ill., will play their first season this fall.