Facebook
Twitter
Pinterest
WhatsApp
- Advertisement -
Verona was on the scoreboard first at yesterday’s softball game, and seemed to have things well in hand against Belleville–until the seventh inning.

The Buccaneers scored three runs at the top of the seventh and suddenly the Lady Hillbillies were behind. Coming off an upset 8-1 win over Glen Ridge in the first round of the Essex County Tournament last week, that wasn’t where the Verona High School players wanted to be.

Catcher Olivia Feiger put her team back on track in the bottom of the seventh with a double that sent in the tying run. Jackie Selby followed that up with another double that drove in the winning run for a 5-4 Verona victory.

The win gives Verona softball an 8-7 record on the season. They face Nutley in the second round of the Essex County Tournament this Saturday in Nutley at 11 a.m. 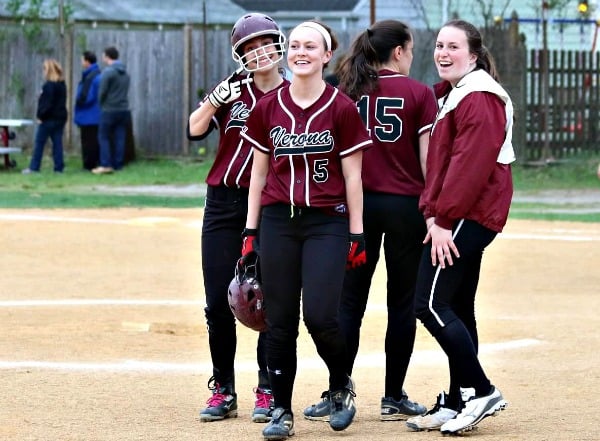 In other Verona diamond news, the VHS baseball team juiced Orange yesterday, coming up with a 10-2 win on Doc Goeltz Field.

Pitcher Luke Connell was all about the number “four”: a four-hitter with four strike outs and four walks. James Hill’s magic number was “three”, thanks to his triple and three runs scored. Paul Chanley and Dylan Oranges were in the “two” column, the former with two RBI and the latter going 2-for-3 at the plate. The team is now 12-5