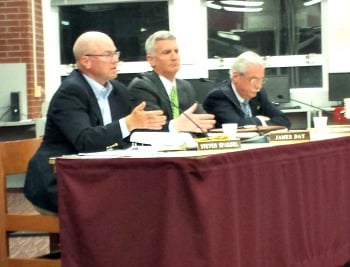 The Verona Board of Education put the bonds needed to finance the March 11 referendum out to auction and the winning bid was much lower than expected.

BOE Business Administrator Cheryl Nardino said at last night’s BOE meeting that the lowest of the seven bidders was 3.0359%, which was well below the 3.65% rate that the BOE’s advisors had estimated the bond would fetch. That drops the annual cost of the debt service by about $10 per household. Verona’s public schools have a AA- bond rating, which is considered high grade.

The BOE said last night that French & Parrello, the firm hired to reshape the upper and lower fields at Verona High School as part of the referendum, had begun to do its surveys of the area. Superintendent Steve Forte said he did not know yet when the firm would submit its designs to the Board. The BOE postponed three resolutions that would have awarded contracts for other referendum work to the Mylan Architectural Group to clarify how subcontractors should be identified in those contracts.

In other action, the BOE approved a budget for the 2014-2015 school year that is a 2.5% increase over the current budget, down from 2.78% when the tentative budget was approved in March, in part because teachers are paying more of their healthcare costs. In the 2011-2012 budget teachers were switched out of a high-cost insurance plan and required to pay 1.5% of their salaries toward their benefits. Now teachers pay a percentage of the premium according to their salary: A single teacher earning $40,000 to $45,000 now pays 6% of the premium; with higher salaries, the payment could be up to 35% of premium. As a result, some teachers have opted out of the schools’ insurance plan, cutting its cost to taxpayers. BOE President John Quattrocchi noted that the Board is talking to teachers about other changes that could further blunt healthcare cost increases.

Last night’s meeting lasted until almost 11 p.m., largely because of a lengthy public comments session spurred by opponents to the field renovation. The “Be A Good Neighbor” group once again mis-characterized several aspects of the project and launched a personal assault on BOE member Steve Spardel for what it asserted was a conflict of interest. Spardel and fellow members Jim Day, Joe Bellino and John Quattrocchi repeatedly refuted erroneous information and statements. You can watch the meeting in full below.