Crock It! Easiest BBQ Beef Ever 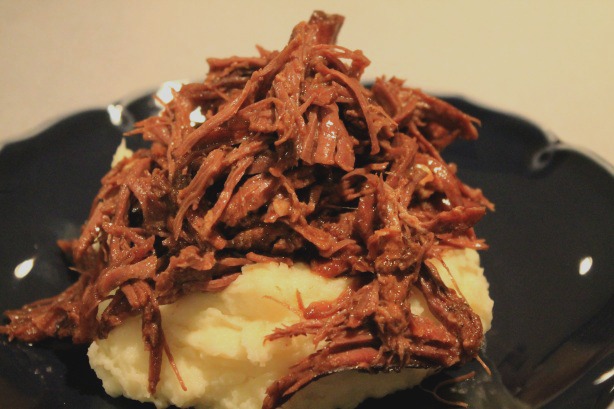 Just before the spring break, I posted a recipe for the Easiest Chicken Ever! The method of seasoning meat the night before cooking is one that I feel really helps with the slow cooking process and adds a level of flavor not always found in braised dishes. I’ve been experimenting on my own family through the winter and not every experiment has been received with rave reviews. Pork holds up really well, and so does the chicken, but beef has been a bit trickier. Between finding the right cut of meat and trying to manage the budget, I’ve probably become my own worst critic. Generally speaking, if my kids are hungry enough I can usually force something less than perfect on them, but since I have to eat it too, let’s just say that I look forward to my dinner way too much to force myself into something that’s just okay. We’re a family of carnivores and as much as I try to mix things up during the week, there is usually red meat once or twice. Given the thrust into spring sports, eating dinner in shifts is an unavoidable weekly occurrence and so is using my slow cooker. If you’ve got hungry mouths to fill and not enough time in the early evening, try this. It was awesome with mashed potatoes (which can always be made ahead of time and reheated).

Special note: This recipe does require planning ahead, so read all the way through.

1-2 tablespoons of your favorite spice rub

The day before: Generously season the steaks on both sides with the spice rub.

Wrap in two layers of plastic wrap and refrigerate over night.

The next day: unwrap meat and place in the slow cooker.

Pour beef broth over seasoned meat, cover and cook for 4-5 hours on high.

When cooking is done, remove beef and place in a large bowl. Shred with two forks and then add barbeque sauce.

My two biggest challenges here were finding the right cut of meat and the right spice rub. I went with skirt steak (also called hanger steak) because I knew it would be tender after braising without being dried out. As far as the spice rub goes, I tried some new ones, but finally decided on one from Fresh Direct, designed specifically for beef. I’m still on the hunt for a better one, and just might find it in my next delivery from Spiceologist.

Serving the meat over mashed potatoes was definitely a win for the whole family. First, my kids LOVE mashed potatoes and second, the empty plates at the end of dinner made for really easy clean up.

If you wanted to add a little something more to the recipe, I would certainly try diced onions; they would easily get mixed up and blend in with the beef.

I definitely plan to make this again but considering these busy nights with spring sports, this was just too easy to keep all to myself.