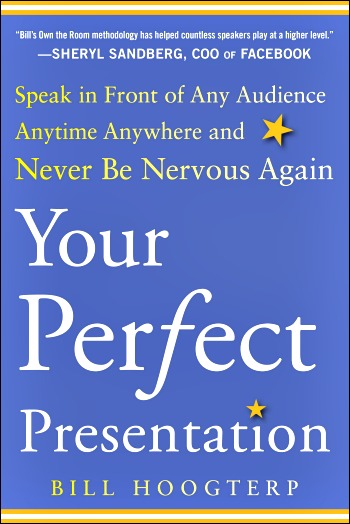 It’s not every day that someone in Verona gets a stamp of approval from the chief operating officer of Facebook, but Bill Hoogterp has gotten just that for his new book on public speaking, Your Perfect Presentation: Speak in Front of Any Audience Anytime Anywhere and Never Be Nervous Again.

Hoogterp is the founder of Own The Room, a Verona-based public speaking business that has trained some of corporate America’s biggest names (like Facebook’s Sheryl Sandberg) to be better presenters.

And no, a book on public speaking is not a contradiction, says Hoogterp. Many of the clients who have attended Own The Room’s seminars asked him to develop exercises to reinforce what they had learned. Those exercises are in the book, along with stories of how others came to be better public speakers. “Anybody can become a good speaker,” he says. “Becoming a great speaker takes work.”

The key, Hoogterp says, is for a speaking coach to help clients feel safe in front of an audience. “Once you make it safe people can learn the techniques,” he adds.

Facebook’s Sandberg was one of those people. She turned to Hoogterp for help before the tour for her 2013 book, Lean In. Own The Room has since done five trainings for Facebook’s senior staff. “Most people think, I don’t do a lot of public speaking,” says Hoogterp, “but think about how much you communicate every day: What would be worth to be 10 or 20 percent better at that for the rest of your life?”

Last summer, Hoogterp did a pro bono seminar for Verona educators like Superintendent Steve Forte and Verona High School Principal Glenn Cesa. There’s going to be another event here this summer and it will be open to educators, Verona residents and even students. For more information, contact Own The Room’s Rachel Warner.

You can find the book on Amazon.com. It’s available in both Kindle and paperback editions.