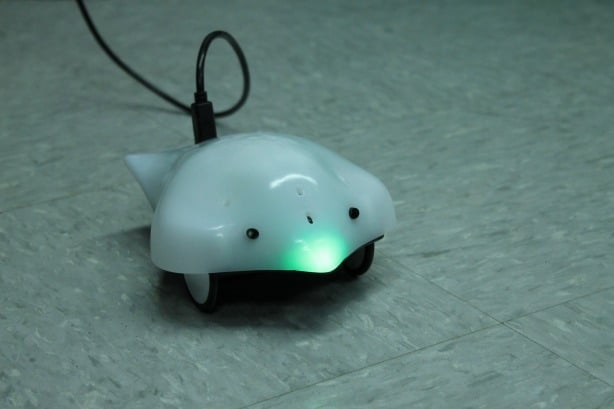 On Thursday, March 27, the Verona Foundation for Educational Excellence (VFEE) is hosting their annual fundraising event at the Verona Inn. Even if you have a child in the Verona public schools, you may not be aware of much of the work VFEE does, or the grants they have fulfilled. These grants have provided award-winning composers, iPads, art supplies and an entire e-book library at the elementary schools and middle school. Educational grants have also been awarded at the high school level, but if you don’t have kids at VHS, you probably haven’t heard about the VFEE grant for the Finches. Not birds, robots.

The 12 Finch robots purchased in May 2013 with a $1,128 VFEE grant live at VHS in the computer science classroom. Directed by Rich Wertz and his AP Computer Science students, these robots are moving, talking, programmable objects. Developed at Carnegie Mellon University, they are inexpensive and virtually indestructible but also highly respected and well cared for by the nearly 108 students who have used them in their first year at the school. The robots, while cute and resembling the bird for which they are named, can do much more than the bird can. The Finches have been programmed by students to perform such activities as automated parallel parking, navigation through a cardboard maze, laser tag between two Finches, and even Spirograph-like pieces of art by attaching a magic marker to the end of a Finch.

Currently the robots are used only in the AP Computer Science classes, and they have been an incredibly successful investment. (The robots were designed specifically for school usage and the only cost was for the robots themselves; the software used to program their movements is free.) Their size, mobility and ease of set up make them an excellent accompaniment to a classroom that was not originally intended for use with robots. Typically, much of computer programming lives on the computer screen, but with the Finches students are more engaged and immediately see a live-action result from their programming efforts.  In the future, there may even be an opportunity to partner with the computer design classes to use the new 3-D printer to create accessories for the Finches.

Wertz, the author of the grant, says that the Finch robots “prove that generous contributions from community groups like VFEE can make a material difference in helping teachers enhance instruction.”

You can attend VFEE’s fundraiser Thursday or make an online bid for their Tricky Tray. Click here to learn how.