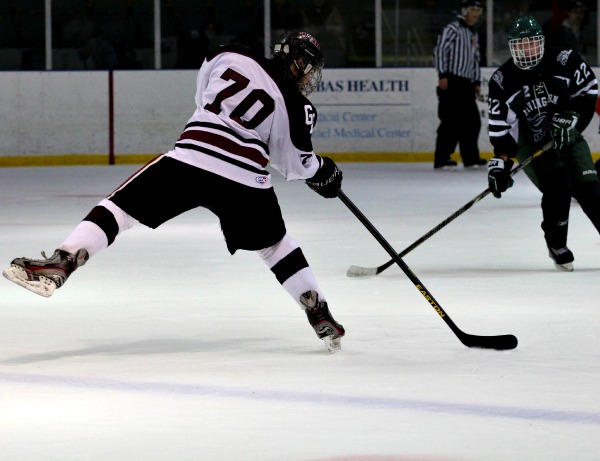 The ice is melting around Verona, but Sean Gluzberg’s preferred world is always frozen. The senior defenseman on the Verona-Glen Ridge Hockey team is on ice as often as he can, wherever he can, and that relentless practice made a big difference to VGR this season. Though that season has ended, the Verona Sports Boosters still want to give a shout-out to Gluzberg as this week’s Senior Athlete of the Week.

A three-year varsity starter for VGR, Gluzberg first got on ice playing for the Brooklyn Stars in Coney Island, where he was coached by Sergei Starikov, a three-time Olympian who later became one of the first Soviet players to join the NHL. The lessons of that great defense player were not lost on Gluzberg this past season: He often shut the “back door” on his opponents so forcefully that you could hear the slam in the top row at Codey Arena.

“Sean is a very important part of the VGR success this season,” Coach Ken Lilien told us in February. “Part of our focus is limiting the opponents shots and scoring opportunities. Sean plays a huge role in that. He is very durable and plays a lot of minutes every night. He also is a key member of the power play and penalty killing units–a quiet leader who leads by example.”

After moving to Verona, Gluzberg joined Jersey Penguins and played on a semi-finals team with the club. He has taken home numerous hockey awards since then for his defensive and offensive play (he had four goals and nine assists this season), including most recently an honorable mention from the 2014 NJIHL-Essex Conference All-Conference.

It should come as no surprise then that Gluzberg intends to continue playing club hockey after he graduates with the Verona High School class of 2014. The world traveler has his eye on a degree in business management and a career in the sports or entertainment field.