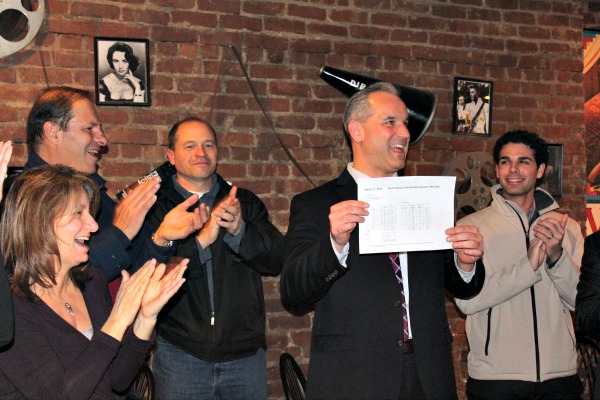 By a vote of 1,766 to 1,065, Verona voters resoundingly approved a referendum to make a host of much-needed repairs to Verona’s six public schools, improve their security and technology, and fix two school fields.

“This referendum was so much more important than any one individual,” says Superintendent Steven A. Forte. “It was really about the community. To see this type of turnout and positive vote was humbling.”

The margin of the victory was huge in Verona terms. In 2005, the buildings portion of the last Board of Education referendum passed by just nine votes. There was a separate fields question on that ballot, and it failed 1,909 to 1,101. A 2007 referendum to turf the upper field at VHS failed 1,428 to 955.

Turnout for today’s referendum was strong. Several groups of parent volunteers, representing different schools, sports and activities have spent weeks talking to potential voters about the referendum and reaching out to them through social media. On Tuesday, many parents gathered at Bella Gente restaurant to call friends and neighbors to urge them to get to the polls.

“Six weeks ago, some members of the Town Council told Mike Passero and myself that this referendum would never pass,” said Frank Ferrari, who actively lobbied for a Yes vote. “And here we are today, thanks to the leadership of Steve Forte and the other Verona residents who put a lot of time and effort in, and it did pass.”

While the results are only provisional, the Yes votes were ahead of the No votes in every district but one, district 7. This is a district of streets around F.N. Brown, where flyers appeared in mailboxes over the weekend urging a No vote. But the margin in that district was slim: There were 146 No votes to 131 yes votes.

The final cost of the referendum to taxpayers was $13.8 million because the Board of Education won a $2.8 million grant from the state, largely on the strength of the repairs needed at Verona High School. The referendum will replace its heating system, which is original to the building and has struggled to keep the high school at a temperature conducive to learning this winter. The referendum will also let Verona put a security system in place at all school entrances, upgrade the schools’ 10-year-old computer platform, and fix potentially hazardous masonry and paving problems at many of the schools.

According to Forte, who will be leaving Verona after the current school year ends for a new position in Denville, the work covered by the referendum will begin almost immediately. “We will start the process of getting plans drawn up and bids prepared,” he said. “After that we award contracts. We will also send out information on the process to the public and inform everyone like we have been doing about the planning phase.”

That outreach will be particularly important to the redevelopment of the fields at VHS. As a result of the “Yes” vote, the Board of Education will be able to remediate problems caused by improper landfill on the upper field and parking lot more than three decades ago, problems that the current BOE was legally obligated to remediate. But the BOE determined that it would be too costly and difficult to fix the field enough to return it to use as a football field. Instead,  the referendum will make it possible to create  a turfed complex on the lower field that can accommodate baseball, softball, lacrosse, soccer, football and marching band.