Opponents of the proposed development at 176-200 Bloomfield Avenue presented a plan last night showing that it is possible to construct a mixed-use building on the site that would be more in keeping with Verona’s zoning, involve less blasting and cut down far fewer trees. Ironically, the developer’s own planner early made an impromptu sketch of a very similar design earlier in the evening as he outlined other designs he had considered.

At the Planning Board hearing, Peter Steck, a planner representing Montclair Avenue residents Jessica Pearson and Jack McEvoy, showed the design above. It features a building set close to the street, just the way most buildings are in the center of Verona and the way the zoning ordinance Verona adopted in 2012 indicates it prefers new buildings to be. It has no car or truck exit on Westview Road–a point of discussion in the developer’s plan–seven second-floor apartments and 50 parking spaces that could be used by residents, building employees or shoppers. Steck’s alternative would preserve more than 40 trees at the back of the site–where most of the blasting would have to be done under the developers plan–and limit excavation to within 20 feet of nearby houses.

The plan  drawn up by developer Dennis Handel’s DMH2 that is now before the Planning Board has a building set back almost 60 feet from Bloomfield Avenue. Because DMH2 wants to have parking between the building and the street–something the new zoning ordinance appears to frown on-it needs the Planning Board to grant a variance, an exception from the ordinance. How the board feels about granting that variance is not yet known. It seemed much more focused last night on whether DMH2 needs an additional variance for the new tiered retaining walls it proposed when it redrew the building plans in January. But it should be remembered that the Verona Board of Adjustment killed DMH2’s first project last March because it was out of step with Verona’s zoning ordinance.

Earlier in the evening, J. Michael Petry, a planner testifying for DMH2, said that he had considered siting the building in the front left corner of the property. Under questioning from John Dusinberre, a lawyer representing two other residents of Montclair Avenue, Petry even sketched the outlines of that building on the current plans (shown in red on the photo below).

Dusinberre asserted that such a building would be more in keeping with Verona’s current zoning regulations, which are less than three years old. “Hasn’t the mayor and Council said we want to push a change to not have front yard parking,” Dusinberre asked Petry. “They are trying to encourage people to move buildings forward and have parking in the rear–that was what the ordinance intended. In spite of all this you propose a building that’s halfway up the hill into the site.”

Petry tried repeatedly to assert that, even though he had considered a building closer to the street, it was not feasible. He said that the building, at 60 feet deep, would not be substantial enough to attract commercial tenants and that parking would be too far from the stores’ entrances. Both points were later disputed by Steck, who asked the Planning Board to compare the size to a newer strip mall just north of Tierney’s on Valley Road in Montclair. Steck also measured the furthest parking spot at no more than 260 feet from the front of the building. That is a shorter car to entrance distance than might be found in a shopping mall or even in Verona’s largest municipal lot in the center of town. The farthest corner of that heavily used lot is more than 300 feet from the back entrance of Terry’s Drugs.

The Planning Board’s next hearing on the DMH2 proposal was set for Thursday, March 27. 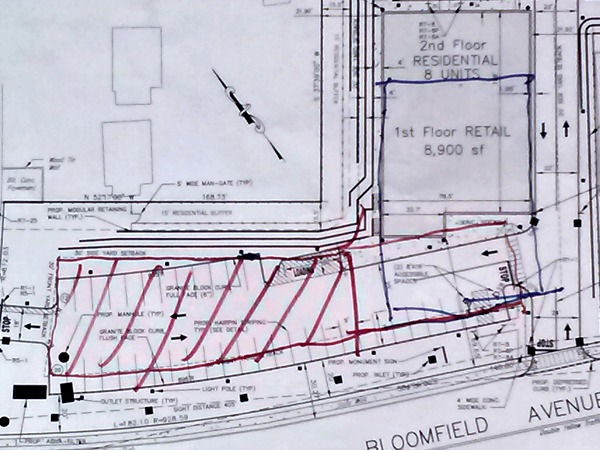