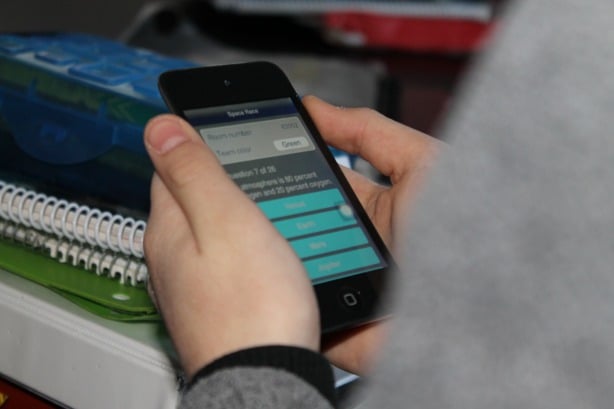 Officially, there is no WiFi network at H.B. Whitehorne Middle School. There is only one computer in most classrooms outside the Media Lab and only a handful of handheld electronics. But that hasn’t stopped teachers Amy Heckel and Jessica Barnes from finding ways to use iPads and iPod Touches–and the wireless access they can get–to enhance the curriculum. What they have managed to do with limited resources shows how Verona might be able to transform education across the district if voters approve the March 11 referendum.

“There isn’t a day that goes by that I don’t use technology in my classroom,” says Heckel, who teaches sixth and eighth grade science. “Honestly, having the opportunity to use technology has really enriched the way I teach as well as provided my students with a plethora of learning opportunities and content they wouldn’t get just from the textbooks.”

Technology is one of the smallest spending categories in the referendum: At $889,086, it is one-quarter of what the Board of Education has earmarked to overhaul the 58-year-old heating system at Verona High School and one-fifth of what we need to spend to fix walls, ceilings and paving. But the tech infrastructure of Verona schools is 10 years old. It does not always work, and even when it does, it is not strong enough to support the district-wide use of computers that modern education requires. A few days at HBW proved that a little technology in the classroom can close the divide between students who “get it” and those who don’t.

In one class of 23 students, Heckel has the challenging job of keeping everyone’s attention and teaching at the same time. With 11 of those students classified as having attention deficit disorder (ADD) or attention deficit hyperactivity disorder (ADHD), this is not always an easy task, even with an aide. The middle school bought a small number of iPads and iPod Touches several years ago thanks to grants from the Verona Foundation for Educational Excellence and the Verona Service League, and they have proved very popular among students. So when Heckel introduced a new unit on the solar system and told students they’d be working on it with the iPod Touches, it created a buzz and even more surprisingly, quiet and focus among the entire class.

What could possibly be so engaging to keep 23 middle school students quiet and attentive? An app called Socrative. Amidst cheers of “I love the rocket ship game!” the students were anxious to get started. Randomly assigned to one of six teams, they immediately started answering questions on individual iPod Touch screens. Cheers and words of encouragement rang through the class, even when students had no idea of who their teammates were. As the teams progressed through the questions, the rocket ships moved across a large screen (connected to Heckel’s computer through the mashed-up WiFi) at the front of the classroom. At the end of the exercise, the iPod Touches were returned to their box, where they remain for safe keeping and overnight charging.

For Heckel though, this was just the beginning. The app generated a spreadsheet for her at the end of the exercise, which told her exactly which students need to focus on what area of content as she progresses through the lessons. In the coming weeks, she would use the app again to evaluate the students’ readiness for a test and guide individual students toward areas of content they need to study–they were no longer left to “figure it out” on their own. Guided by a tech-enabled teacher, individual students could be better prepared and achieve success in science.

Barnes, meanwhile, uses iPads and an app called NearPod in a small classroom of five special education students, to create visual content that reinforces her lessons. She puts each lesson into slides that show up on the student’s iPads. While reviewing the lesson, the students circle their answers on their individual iPads. Each student’s answer comes back to Barnes where she can openly discuss with the class the correct or incorrect answers so all students benefit from the exercise. Not surprisingly, the students were attentive, respectful of the machines, and proud of all correct answers in their group setting. Barnes says she has always planned her lessons to be student centered and hands-on.

“But the iPads have taken my instruction to a new level and have enhanced the students’ knowledge utilizing a familiar tool to them,” Barnes says. “iPads allow the students to ‘teach’ themselves and deepen their understanding of the topics we are discussing in class.”

But cobbling together WiFi for two classrooms and a handful of wireless devices is not enough to move all of Verona’s students into the tech-focused future. The iPod Touches are now outdated and so are the apps. The iPads are okay, but there are only 10 of them. The reality is that even if there were more, the WiFi that connects them now in the classroom would likely crash.

The technology Verona intends to buy under the referendum would make it possible for more technology to reach more students. The bulk of the tech spending–$500,000–will go for a new technology backbone, which is something like the electrical panel we have in our homes. The existing panel turns on the lights, but adding an air conditioning unit would blow the whole fuse box. We can’t reach more general education students with what we have, and we can’t use more technology to help special needs students keep pace with them.

If you have ever struggled in school, imagine the difference it could make if there were a new and engaging way to learn. A way to truly understand a subject that just didn’t make sense. We live in a time when there are tools for these struggles beyond simple memorization and study drills, but if our schools don’t invest in the technology to bring them to the classroom, the ones who suffer the most are our students.