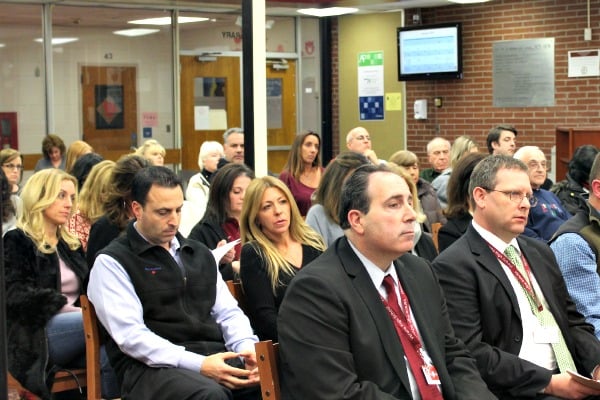 In a highly charged meeting last night, the Verona Board of Education first debated splitting the proposed referendum into separate votes on the building and multi-purpose fields–and then returned to a single referendum on both projects.

The BOE meeting was held before a packed room, with many of the spectators drawn by the news that Superintendent Steven A. Forte would be resigning for a job in Denville, a story that MyVeronaNJ.com broke early yesterday afternoon.

The meeting opened with presentations from Verona High School students on outreach and extracurricular activities and an update from Forte on the district’s strategic plan (beginning at at 13:37 mark in the video below). But when the meeting turned to the referendum, it became apparent that the BOE was considering splitting the vote into two questions. BOE President John Quattrocchi said that one question would contain the spending on building repairs, security and technology updates, and repairs to the VHS parking lot and tennis courts. The work on the upper and lower fields at VHS–which would involve turfing the fields for multiple activities–would be held apart, to keep a failed vote on that question from derailing other projects. The heating system at VHS is 50 years old, and school officials are worried about it failing during the cold weather we have been having.

The BOE’s debate on the split went on for an hour, to often audible expressions of disbelief from the audience, who had considered the shape of the referendum settled. When Quattrocchi opened the floor for public comments, the reaction was harsh. Paul DellaValle, whose children have graduated from VHS, was one of several speakers who berated the BOE for undercutting Forte in his effort to get support for the referendum. “He’s got the ball and he’s running down the field and the end zone is in sight,” DellaValle said. “You guys are supposed to be the blockers, and you know what I’m seeing? You’re letting people through to tackle him.” He criticized the board for its indecisiveness on the referendum planning. “You’re failing us,” Dellavalle said. “You’ve got to stop leaning on the town. They need the fields. You don’t have priority. There are kids in town who need those fields.”

“The politics is bad and it’s getting dirty and I am appalled,” DellaValle concluded, to loud applause.


Quattrocchi, who had seemed in favor of a split referendum at the start of the evening, abruptly agreed to one vote on both issues, but cautioned the audience on the cost of a failed referendum. A vote on turfing the upper field at VHS lost by a wide margin, and the last referendum on building improvements passed by just 10 votes. Quattrocchi noted that because of rising rates, the interest charges on a project like the one that Verona is considering have risen by about $2 million in the last year, and predicted that they would be higher still if the BOE has to submit a new referendum in September.

Joe DeVivo, who lives in the F.N. Brown district, said he understood the risk. “The bottom line is that we have to embrace that Verona is not a lower middle class town,” he said. “We’re here for a reason. We don’t want to have a dump outside, we don’t want to have a dump in here. ” “The decision is easy– we need $15 million in upgrades to these facilities,” he added. “We have to get all this stuff done.”

Lisa Violante said that people from outside Verona who had seen VHS were “appalled” at the condition of the school. “It’s an embarrassment,” she said, “this should have been decided a year ago.” Quattrocchi agreed, but said, with clear frustration, that the numbers on the project were still in flux and appeared to blame Forte for that.

While the meeting was going on, Joanna Breitenbach, a Laning-area resident, polled her Facebook friends for their reaction, and told the Board that they favored a single vote. “I am walking up and down my street talking to whoever I can about this,” she said.

Board member Joseph Bellino had expressed support of the single vote from the beginning of the meeting. “What we need is more people like yourself contacting your friends, contacting your neighbors,” he said in response to remarks by resident George DePaul. “You need to tell them what you’ve told us.” When Quattrocchi finally polled the others, Steve Spardel and Jim Day both acceded to the single question, but reluctantly. Only Michael Unis remained committed to a split referendum. The Board must submit final materials on the referendum to the state soon. The vote is scheduled for March 11.

You can watch the entire two-and-a-half hour meeting in the video below: