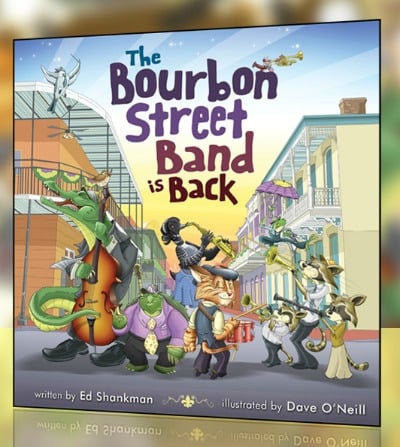 Verona resident Ed Shankman is the author of seven rhyming children’s books that have been read to hundreds of children all over America. But this Wednesday, he’s going to read one of his books to more than 500 children at one time in one place: New Orleans.

Shankman will be in the Big Easy to kick off “Turn The Page“, which aims to make New Orleans the most literate city in America by its 300th birthday in 2018. And the book Shankman will be reading on Wednesday is as much New Orleans as jambalaya and beignets. Entitled The Bourbon Street Band is Back, it is about the power of music in a city that definitely knows music.

“When our publisher, Applewood Books, suggested a book based in New Orleans, I was thrilled because I am a musician with a deep love of music,” says Shankman, “and because New Orleans is a national treasure, rich in culture, especially musical culture.”

“The book basically asks the question, what would New Orleans be like if the music stopped,” Shankman says. “In order to explore this, we actually have the music stop one day and New Orleans, for a time, becomes a sad, stark shadow of its former self. Of course, in the end, our heroes—Bobcat Bob and his Bourbon Street Band—come back and bring the the city back to life with a musical extravaganza the likes of which the city has never seen.”

If you are in New Orleans on Wednesday, you can participate in Turn The Page by going to the main branch of the New Orleans Public Library at 219 Loyola Avenue at 10 a.m. If not, you can join in in spirit on The Bourbon Street Band is Back on Facebook.