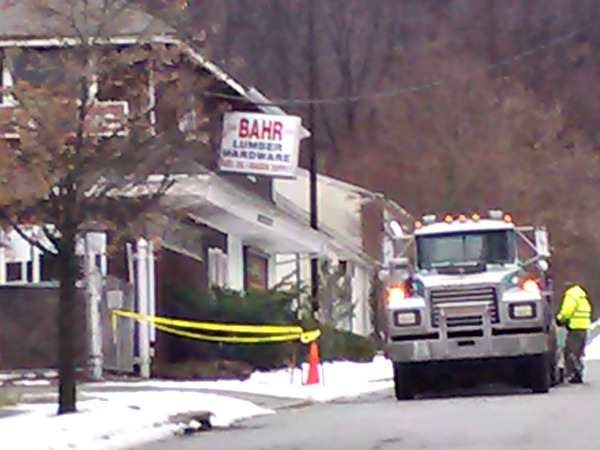 Rain isn’t the only thing coming down this morning: Demolition has begun on the former Bahr Lumber site to make way for a new Lennar Corp. townhouse development.

According to Tom Jacobsen, who heads Verona’s Buildings Department, demolition permits were issued last Thursday for the project. Work on the site was put on hold after a lawsuit was filed by Durrell Street residents against the Township of Verona, the mayor and Town Council and the Planning Board over the change in zoning on the site from M-1 manufacturing to A-3 residential. The 3.6-acre property was home to the Charles Bahr & Son lumber business from 1924 to 2011. (Bahr Oil has moved its headquarters to Bloomfield Avenue.)

Terms of the lawsuit settlement are confidential, but Verona Township Manager Joe Martin expressed satisfaction that work was beginning on the site. “This is an important project for Verona,” said Martin, who will be meeting with Lennar officials on Tuesday to review their construction plan. No building permits have yet been issued.

Lennar’s original plan called for six buildings set perpendicular to Durrell with street-front facades that will look like a single-family home. The buildings will contain 33 attached townhouses with two bedrooms and a total of 2,600 square feet of interior space.