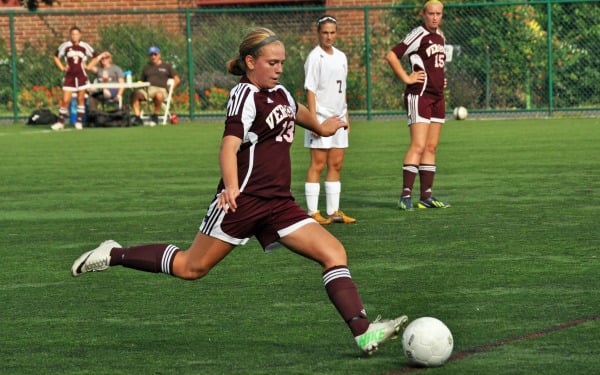 Soccer has been Sprong’s passion at VHS, and she has made her mark on the sport almost from the beginning. When the girls soccer team made it all the way to state semifinal against New Providence in November 2011, it was Sprong–then a sophomore–who put Verona on the scoreboard first. That year, Sprong was named to The Star Ledger‘s “Top Sophomores” team. Soccer has not been her only sport, however: In 2012, she was part of the girls track team that that took first place in the 4x1600m relay at the Aviator Relays.

Sprong is a stand-out off the playing field as well. She was among 23 students recently honored by the Board of Education for being an AP Scholar Student, awarded to students who get scores of 3 or higher on three or more AP exams. She has been involved in both the VHS mentoring program Heroes and Cool Kids and the VHS Student Council. When Sprong was inducted into the National Honor Society last spring, Dr. Marie Meyer, called her “a beacon of talent, strength, and grace”.

During the 2013-2014 school year, the Verona Sports Boosters recognized a different senior athlete at Verona High School every week. The Boosters support male and female athletes in all VHS sports through a variety of fundraisers and recognition events.