Charlie Miller, the new director of curriculum and instruction for Verona’s public schools, has released the results of the High School Proficiency Assessment (HSPA) given to Verona High School juniors this past March.

Verona has been focused on lowering its partially proficient scores on the HSPA and narrowing the gap between Verona and the districts that are in our same District Factor Group (DFG I) such as New Providence, Caldwell, Berkeley Heights, Cedar Grove, and Glen Ridge. DFG is a state grouping of schools according to socio-economic factors.

The results show that Verona’s partially proficient score in mathematics decreased to 8.4% for our district, a five-year low, and Verona eliminated the gap between VHS and our DFG I peer average. Additionally, Verona raised its Mathematics Advanced Proficient (%AP) score to its highest level of 39.6% over the past five years and have narrowed the gap between Verona and our DFG I peers to 8.9%. VHS’s Mathematics %AP score of 39.6% is a 12% increase since 2009.

Verona’s Language Arts Literacy partially proficient score of 1.9% is, for the second year in a row, below our DFG peer average. Over the past five years, Verona has lowered this score approximately 8% compared to the DFG I average of 3%. The Advanced Proficient (%AP) score of 38.7% is our highest result in five years and doubles our %AP result from 2009. Moreover, the LAL %AP continues to close the gap against the DFG %AP average. Verona High School has increased 29% while the DFG I only increased 20% from 2009 to 2013. 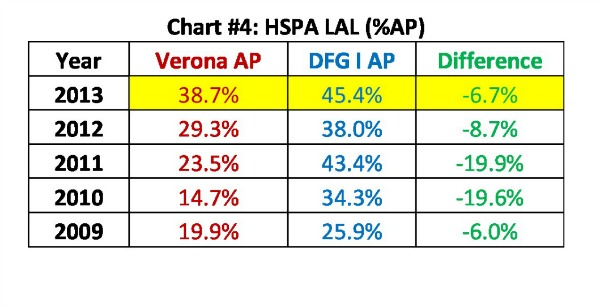