The 13U New Jersey Nationals (based out of North Caldwell) competed in the New York Elite Baseball Tournament in Newburgh, N.Y., over the weekend of July 21 and 22. NYEB is one of the largest tournaments in the tri-state area, with over 100 teams entered the tournament in various age divisions including the Nationals in the largest pool of teams within the 13U division.

The Nationals were helped by four Verona players: Sal Vassallo, Tino Quagliata, Ian Metzger and David Festa. The tournament was a two-day event and the ultimate winner had to win five games in two days in 97-degree heat. The Nationals got hot and stayed hot, and in the championship game they upset the #1 seed, Geared Up, to take home the trophy. Geared Up is a club team comprised of players from all over New York state. Heading into the championship game, Geared Up had let up only one run over their first four games of the tournament. The Nationals are a team comprised of mostly local players from the Verona, Livingston, Montclair and East Hanover areas.

In the championship game, Geared Up had a 5-3 lead heading into the last inning and was just one strike away from a tournament victory. The Nationals had two outs in the 7th and nobody on base. The Nationals never gave up, however, and scored two runs to tie the game and send the championship into extra innings. The Nationals would eventually win the game in the ninth inning and complete a perfect 5-0 record for the weekend.   Four of the five Nationals pitching victories were captured by the three Verona pitchers in the tournament: David Festa (2-0), Ian Metzger (1-0) and Tino Quagliata (1-0) came through with these victories. 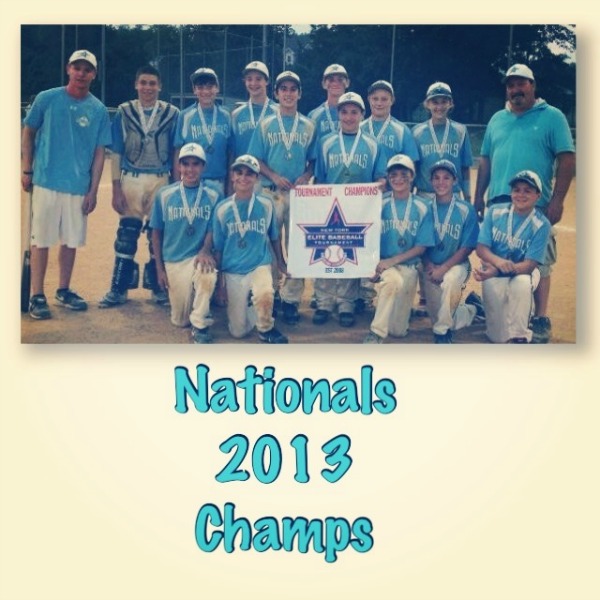