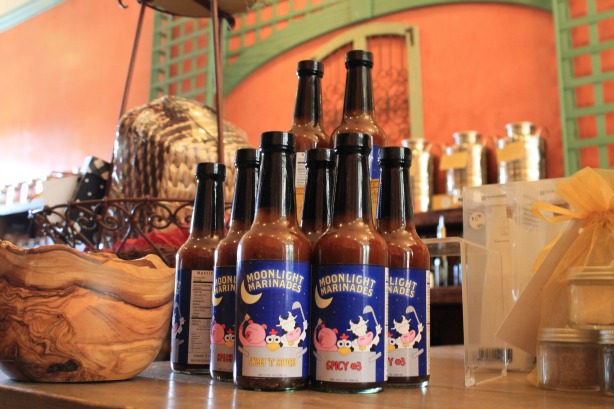 What does Verona have in common with Brooklyn and Queens? Nothing, except that it brought two Verona residents who were constantly disappointed with barbeque flavoring options together to create something totally new. Jon Held, and engineer by training and Eric Schechter, a labor relations negotiator, took their love of the grill and their desire for a better backyard barbeque and started moonlighting to create two marinades and a spice rub.

The journey, which began about a year ago, has been both inspiring and time consuming for Held and Schechter, neither of whom have quit their day jobs to take Moonlight Marinades from a backyard adventure to a viable business. In an effort to get the difficult aspects of owning and running a food based business, without a storefront, Held and Schechter spent the first 6 months of their business planning “getting through the red tape,” as Schechter described it. An effort intended to allow them to focus on mixing, bottling, marketing, and selling their product. The early investment in time and money has paid off. With an FDA-certified kitchen in Little Ferry, and an FDA-approved food lab in Saddle Brook, Moonlight Marinades’ products are ready for any food store shelf anywhere.

Now, for the flavors themselves. Neither Schechter nor Held have a culinary background, but after moving to Verona from Brooklyn and Queens respectively, they both discovered backyard grilling. There has been a lot of trial and error, much experimentation, and plenty of taste testing. But when Schechter went back two generations to his grandmother’s recipe, incorporated high quality fresh ingredients (like garlic) for the original lesser quality ingredients (like garlic salt) he saw immediate benefits in the flavors. For Held, a self-taught griller, the evolution from growing up with canned and frozen foods to cooking from scratch led to a discerning palate. The result, and motivation, from here was the desire for better tasting marinades. Starting from scratch, in their individual homes and then taste testing with neighbors, Moonlight Marinades was born. Based on honest feedback from taste testers, Held and Schechter revised their flavors and finally completed their two flagship marinades, Spicy #3 and Sweet & Savory. Still in FDA testing is a dry spice rub due out by late summer.

What was the method behind the marinade? Both Held and Schechter believe that when reading an ingredient label, one should be able to read, pronounce and understand every item listed. By sticking to natural ingredients in a repeatable formula, these pit masters were able to create a product inspiring comments like, “Honey! Buy two bottles of each” and “You have to try this!” As Schechter put it, “We’re not trained experts, we just know what’s good.” Comments from tasters like these have been one of Held’s favorite aspects of this culinary adventure. “We asked people not to be ‘nice’ with their feedback,” he said. The flavors are intense, but the work is easy, and as one taste tester noted, it ‘s as straight forward as: marinate, prep, and cook.

Moonlight Marinades currently has their products available for purchase online and on the shelves at Olive That and More in Montclair where they had a tasting event in June. They plan to partner with additional local food venues for more similar events in the coming months. The next live tasting will be on Saturday, July 13, from noon to 2 p.m. for a Vegan Barbeque at Olive That and More in Montclair.