What’s Next For VHS ’13: Fast Track To Med School

In recent years, Verona High School has been pushing more students to take Advanced Placement courses and the exams that go with those classes. Enrollment has skyrocketed and so has the number of students scoring a three or better on the tests. The classes are often touted as a way for VHS students to earn college credit in high school, but for many students and their parents, there are lingering doubts about the benefits of AP classes. The Jung family is not among the doubters.

Thanks to his performance in AP classes, Benjamin Jung, the co-salutatorian of the Class of 2013, will be skipping a full year of college. And not at just any school: This August, Jung will begin studies at McGill University, ranked 18th in the world among institutions of higher learning. After three years as an undergraduate, Jung will be on the fast track to his goal of attending medical school and his parents will have saved one full year of tuition.

So how did he do it? Jung started with honors classes in freshman year (overruling a recommendation from his teachers at H.B. Whitehorne that he begin “on-level”) and took his first AP class in his sophomore year. In all, he took AP U.S. History I, Computer Science, Biology, U.S. History 2, Language and Composition, Calculus AB, Physics C Mechanics, Chemistry, Literature and U.S. Government. “I wanted to take AP European History, but my schedule did not permit it,” Jung says. He got a five on all of the AP tests but three and when all the AP test results are tallied this month, Jung expects to have 26 credits under his belt. Jung joked, during his graduation address, that he was probably best known at VHS for studying or for being asleep on a stack of books “learning by osmosis.”

Jung bolstered his college application by attending a med school summer camp at Brown University and joining the Verona Rescue Squad. He started by getting so-called first responder certification at 16 and took the 200-hour emergency medical technician class during senior year. “It was a large commitment, especially on top of school,” he concedes.

In Montreal, where McGill is located, students typically do five years of high school and just three years of college. Jung’s AP credits earned him the equivalent of that fifth year, but even so, acceptance wasn’t a lock: Though 21% of McGill’s roughly 38,700 undergraduate and graduate students are from countries outside Canada, only a fraction of that are Americans. McGill officials say that 3,398 American students applied for the fall 2013 start, but only 1,620 were admitted and only 395 have confirmed their registration. (You can read McGill’s application guidelines for U.S. students here.) 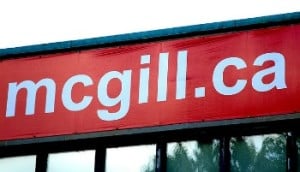 To be sure, not every AP class will be accepted by every college. Students generally need a four or a five on the AP exam, and they might not get any credit for AP classes that are in their intended major. Yale University gives only one or two credits each for a limited number of AP exams; Harvard gives none. College policies are so diverse that The College Board, which administers the tests, has devoted a section of its Web site to an AP credit search. (You can read VHS’ guide to AP classes here.)

Jung is as surprised as anyone about the result of all his studying. “I liked the concept of AP courses, but I wasn’t sure what it meant,” he says. “I never imagined that I would be able to skip a year of college.”

Photo of Ben Jung by Tom Jung. Photo of McGill in winter by Jazmin Million via Flickr.

You can read about the post-VHS plans of more students here.