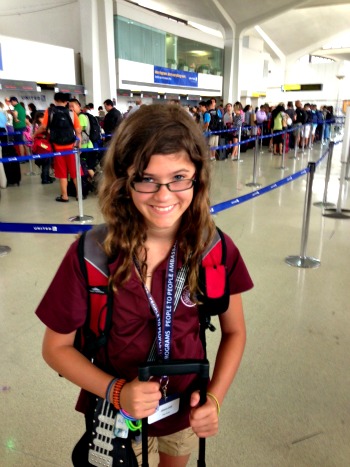 Ariana Marie Dyer, an H.B. Whitehorne Middle School sixth grader packed her bags yesterday and left for France and England. From July 2 to July 15, she will participate in the People to People International student ambassador program.

Dyer, 12, will spend two weeks touring parts of France and England and enjoying a cultural exchange. She has been participating for several months in learning activities with the delegation, including community projects and discussions and readings regarding being a good citizen abroad, and how to represent her school and country during the trip.

She had to work to join the program. “After being recommended by a teacher, to be considered, I had to go through a rigorous interview process as well as submit three letters of recommendation,” Dyer said. She will be participating in the program with students from New Jersey and other parts of the country.

“When we received the phone call and letter of her acceptance, we were thrilled and so proud of her,” said her mom, MariaElena Dyer.

Although Dyer is looking forward to all facets of the trip, she is particularly interested in visiting France. “I have been studying French at H.B. Whitehorne, and have learned a lot this year about French culture, parliament, and lifestyle at both school and at delegation meetings,” Dyer said. “In addition, I did my People to People delegation project on French culture and food.”