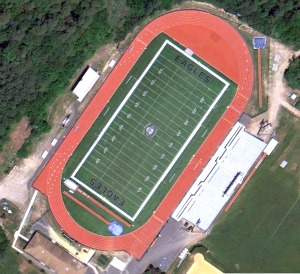 It was one for the record books when the Verona High School girls track team competed in the state Group Track & Field Championships at Egg Harbor Township High School this past weekend. The lady Hillbillies set three VHS records and one meet record while taking three first place state group finishes, and securing places in the Meet of Champions for all five Verona competitors.

On Friday, Julia Ashley got second place in the 400m with a blistering time of 55.9, only to get ready for the next race to anchor her 4 x 800m team. The 4 x 800m team of Kelsey Attamante, Sarah Conboy, Melanie Egan and Ashley set both a new meet and school record with a 9.45 performance. Marybeth Grund also had a season best time in the 400m hurdles to place fifth with a time of 1.07.

On Saturday, Ashley walked up to the starting line for the 800m only 15 hours after her incredible performances the night before. She wowed the crowd with a first place time of 2.13.8, another school record. But she wasn’t done for the day. In a few hours she would be cheering on her friend and teammate Melanie Egan in the 3200m with the temperatures in the 90s. Egan responded with a brilliant race plan to win Verona’s third event of the meet in 11:42.

Ashley, Attamante, Conboy, Egan and Grund all qualified for the Meet of Champions this Wednesday at Jost Field in South Plainfield. Coach Gene Leporati couldn’t be prouder. “I told the girls,” Leporati said, “that this experience was truly one of the most memorable of my coaching career.”