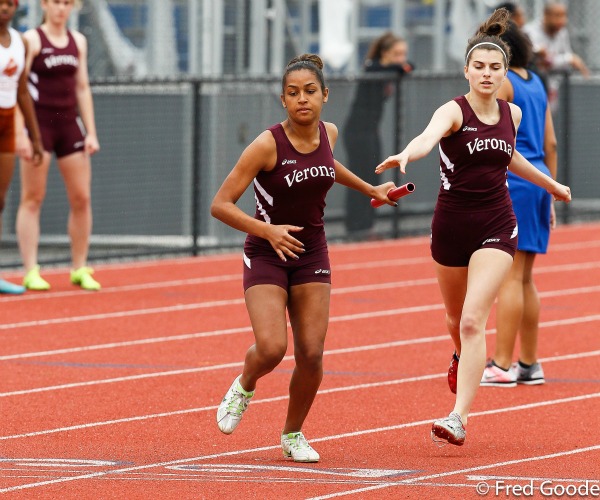 The Verona High School girls track & field team came in second in a field of eight teams in the SEC Conference Championship on Saturday.

Weequahic High School won the meet with 162 points, while Verona had 145 points and Science High School was third with 56 points. Due to a weather delay, the meet, which was held at Newark School Stadium, was not officially completed until Monday.

Verona had some record-breaking performances throughout the day. Sophomore Julia Ashley had a first-place finish in the 400m in 57.9, which set both a new meet and school record. She finished second in the 200m in 27.1, while setting a new school record in long jump with a jump of 17’5 1/4″.

Teammate Melanie Egan set a new meet record in the 3200m at 11:43 while also getting second in the 1600m. Junior Christina Carlucci got a first place in javelin with a throw of 90′ followed by teammates Nell Karpinski and Jess Hall who respectively got second and third place with throws of 87′ & 82′.

Diana Moczula finished second in discus with a throw of 87′, followed by Verona’s Sonali Vaishnav at 82′. The 4 x 400m relay team of Colleen Farrell, Jess Williams, Jordan Seubert and Julia Ashley took second with a 4:20. Kelsey Attamante and Sarah Conboy came in second and third in the 800m with times of 2:27 and 2:32.

Verona’s pole-vault squad of Gabby Mercurio, Cristina Calandra and Tara Hull came in third, fourth and fifth with jumps of 8’6″, 8′ and 7’6″. Amanda Flores came in second in the 3200m. and fourth in the 1600m.

Several ninth graders also added to Verona’s score. Julia Capuano took fourth in the 3200m, Emily Petermann was sixth in the 1600m and Caroline Kirnan was sixth in high jump.