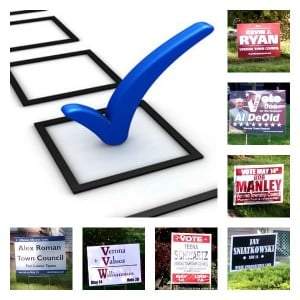 On Tuesday, May 14, the voters of Verona have a chance to influence the direction of town for the next four years–and perhaps many years beyond that. On Tuesday, Verona votes to fill three seats on the Town Council. Here’s what you need to know about the issues that will face the next Council, the candidates who wish to be part of that Council, and their thoughts on key issues. One other thing to know: The decision is yours. MyVeronaNJ.com does not do endorsements. Rather, we believe in providing information on the issues and the candidates so that voters can make their own decision. The polls are open from 6 a.m. to 8 p.m.

There are seven candidates running for the three open spots, and three are incumbents: Jay Sniatkowski is seeking a fourth term, Bob Manley is seeking a second term and Kevin Ryan, who was first elected to fill an unexpired term of a previous Council member, is seeking a full four-year term now. Among the challengers, one–Teena Schwartz–has previously served two terms on the Town Council (she did not run in the last election). The other challengers include former Verona High School teacher Al DeOld, corporate executive Alex Roman and contractor Rich Williamson. You can read more about the backgrounds of each, and their reasons for running, by clicking on their name, which will also take you to their Web sites, if they have one.

The new Town Council will approve the contract to build the two multipurpose sports fields on the hilltop behind the Verona Community Center, and all seven candidates are in favor of the project. But that is far from the only issue looming over the next governing body. Property taxes have risen sharply in Verona during the recession, driven in large part by a steep decline in ratables, a generous contract with the police and the cost of running the town’s many operations. The Council has yet to vote on the 2013 budget: A proposed 2.5% increase was introduced on April 2, but the Council asked for lower options, which Town Manager Joe Martin has yet to supply.

While the Town Council runs Verona with a paid town manager, the next Council must have a firm enough grasp of the budget to challenge assumptions and assertions about town spending. Ryan, Roman and DeOld have put considerable effort into pulling apart last year’s budget and this year’s proposed budget to find excesses and anomalies. Schwartz wants all department heads to produce zero-based budgets that justify all costs anew each year rather than base increases on previous spending. At the April 18 candidates forum sponsored by MyVeronaNJ.com and the Verona Observer, Schwartz drew on one of Martin’s favorite analogies–elephants and mice–to explain how the Town Council should manage its expenses. “We need to exterminate the mice,” she said succinctly. While elephants are obvious and grow slowly, she added, “mice multiply exponentially and they hide between the walls. They can do as much damage or more damage than elephants.” As Sniatkowski has often emphasized, the budget surplus eliminates the wide tax swings we saw in the past. But it may be too much padding. Manley indicated at the forum that he would be amenable to lowering the town’s surplus to perhaps $1.5 million from the $2.5 million Martin generally carries. One other smart idea: Flexible scheduling of town employees to minimize overtime. Favored by Ryan, Roman and DeOld, it’s a private sector staple that’s long overdue in the public sector.

Verona has cut staffing in both the police department and Town Hall in the last eight years, but attrition alone won’t keep the remaining positions manageable if salaries and benefits remain as generous as they have been in the past.  As Martin noted in the last Town Council meeting, Verona now has as many active police officers as it has officers receiving retiree health benefits. Up for renewal again this year, the employee contracts are not entirely within the Council’s control–we’ll need clear-eyed help from Trenton and union negotiators.  But the Council must be prepared to take advantage of whatever opportunities it can. At the April forum, Ryan faulted the Council that had preceded his election for election for extending the contracts even as the state was readying laws that could have cut Verona’s costs. “There was no attempt to even open the contract to see if there were work-rule changes that we could have put in there to cut costs,” Ryan noted, “work-rule changes that would not have triggered overtime.”

Verona has lost a staggering amount of its tax base during the recession–$50 million last year alone. That has resulted in higher property taxes, even in the years in which the budgets have been flat. Recent Councils have reformed Verona’s zoning and code to make the town more business-friendly. That has produced some improvements, like the new Verona Inn and the relocated FrankAnthony’s, both of which have added outdoor seating, a code change championed by Sniatkowski. He and Schwartz also made the push for solar panels on town buildings, which earn us a nice steady stream of income without much effort. The next Council will need to find more dollars like this on and off Bloomfield Avenue: Flower baskets are nice, but they are no substitute for economic development and shared services agreements that put real money in Verona’s pockets. Manley has raised the possibility of other PILOT agreements like the Hilltop, but unless projects are chosen judiciously they will rob the Board of Education of the funding it needs. These payment-in-lieu-of-taxes programs also can take a long time to get to full strength: The Hilltop PILOT won’t generate more than $1 million a year until 2029.

Very soon after it takes office, the next Council must decide whether to renew the town manager’s contract or seek his replacement. Verona’s debt rating has stayed strong under Martin, but his abrupt style and resistance to a more open government have been thorns to some in town. When Martin resisted opening the budget workshops to TV earlier this year, Ryan and Sniatkowski pushed to bring the cameras in. “One of the things that we run into is that the town manager is never willing to yield ground,” said Roman. “There is no back and forth.” An informed Council should be a partner of the town manager and a town manager should be receptive to dialogue with the Council and citizenry.

Perhaps the most telling moment of the April candidates’ forum came when they were asked to say how they would spend a windfall: All seven said they would use it to pay down the town’s debt, which currently totals $29 million. We are below the problem level as far as the state is concerned, but maybe not far enough to not be a problem for us. Roman noted at the forum that Verona’s debt service costs are on par with its spending on healthcare. Schwartz has  said that, before bonding is approved for any capital project, she would make it subject to a referendum.

While the candidates all want to keep Verona a nice place to live, they have different views on how to make that happen. Take time to watch this video and those in the list below, and get out to vote on Tuesday.