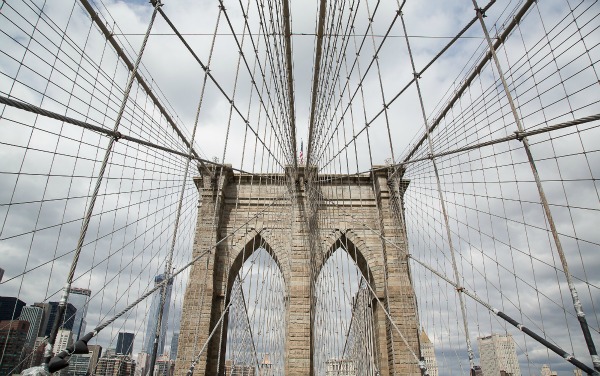 Sometimes, you just have to be a tourist: You have to walk the Brooklyn Bridge.

Tourists aren’t the only people who walk it. You’ll see Wall Streeters jogging the bridge for exercise and bike messengers flying across to deliver documents from Brooklyn’s courts to those in lower Manhattan. But a multi-lingual group of tourists dominates the traffic on the bridge on any given day, drawn by one of the best views of the New York City skyline. Here’s how you can see it too.

You can walk from Manhattan to Brooklyn or the reverse. The walk is just a little over a mile one way (think Linden from Pompton to Fairview), and there are subways, cabs and water taxis to take you back to where you started if you don’t feel like walking back. Since I lived in Brooklyn for a decade, I got used to walking west, and I still think it is the best way to go.

There are two pedestrian entrances to the bridge promenade from the Brooklyn side. At Cadman Plaza, which is near the High Street stop for the A & C subway trains, you’ll need to climb some stairs. I’ve done it with a stroller and toddler, but if you prefer something easier, you can also get on the walkway at the intersection of Adams and Tillary streets. Wherever you start, stop for a minute to take in the vast openness of the sky. There is nothing like that expanse here in Verona, not even the view from the Hilltop.

Everything about the bridge is large, from the giant granite blocks in the pilings to the miles of cables that hold the whole thing together. Oh, and the large number of pictures that must be taken every day by all the tourists walking across. The foreign visitors may also be responsible for a curious sight: Dozens of padlocks, clipped tightly to fencing and anchors along the bridge. Taking their inspiration from an Italian book and movie, couples write their names on the locks, clip them on, then throw the key into the East River to cement their relationship. This being New York, the city’s Department of Transportation comes along every so often to cut the locks loose, but see how many you can count as you walk across.

Count, too, the number of different architectural styles in the skyscrapers of lower Manhattan as you walk toward it. There’s the ornately Gothic Woolworth building and the stark lines of Pace University’s Manhattan campus. You can watch the progress on the Freedom Tower rising at the new World Trade Center complex and be puzzled by architect Frank Gehry’s building at 9 Spruce Street, which seems to defy all laws of construction with its rippled facade.

View Larger Map
When you get to the Manhattan side, ignore the vendors and their tchotchkes, and cross the street to see New York City Hall, a Renaissance Revival structure that is somewhat grander than our own town hall. You can still tour the building for free, but it is a more complicated process than when I lived in NYC. You’ll need to fill out a reservation form in advance, which you can find here.

What then? You can walk back across, or take one of several subway lines nearby. The 4, 5, and 6 trains stop under the Manhattan Municipal Building on Centre Street and will take you to Jay Street-Boro Hall in Brooklyn. The R train goes from the far side of City Hall park to nearby Court Street. The A and C trains back to High Street can be found at Broadway and Nassau.

But if you want to continue to take in the skyline, walk down to the East River waterfront. The area was devastated by Hurricane Sandy; most of the shops and restaurants at the old Fulton Fish Market are still closed. But if you go south of Wall Street to Pier 11 you can catch a water taxi to Brooklyn Bridge Park on the opposite side. It’s only $4 one way. The park is still in development but there’s a children’s playground and a marvelous old carousel that survived Hurricane Sandy only because it is enclosed in thick acrylic walls.

When you walk the bridge, bring your camera, a little bit of money, and your lock. I won’t tell anyone. 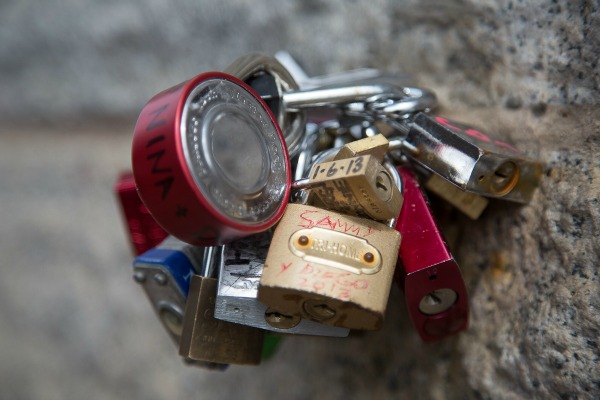