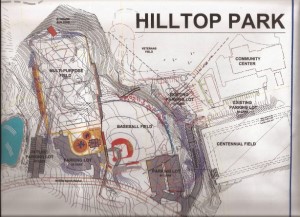 On Monday night, the Verona Town Council heard the first details on the cost and financing of the two sports fields planned for the Hilltop, and the details left them looking for more.

Town Manager Joe Martin gave the Council an ordinance that put a $5.125 million price tag on the two multipurpose fields, which will be covered in turf. According to the estimate prepared by Kinsey Associates, the synthetic grass is the largest part of the project’s cost: $620,000 for the softball field and $848,000 for the rectangular field. There will be benches, bleachers, parking lots, planters and lighting, a $40,000 press box and $408,000 for a concession stand. (Martin said later in the meeting that the previous $4 million price was a miscalculation on his part.)

The estimate does not include the $1.5 million amphitheater that had been proposed by Council member Bob Manley. It also does not include a reserve for turf replacement. The synthetic covers generally need to be replaced every eight to ten years.

The work will be financed initially with short-term notes, which will be converted to long-term bonds once construction is completed. Those bonds will likely have a 20-year term and the debt service on them–roughly $250,000 a year–will be paid from revenues collected from the new Cenrose apartment development on the Hilltop.

That is the theory at least. But Monday night’s presentation failed to include any projection of what revenues will be generated by the Highlands at Hilltop, as the development is known, over the 20-year life of the field bonds, a fact that troubled some council members. The presentation also may have left some folks with the impression that the revenue from the Hilltop is standing by waiting to be used only for this project, which is not the case.

The Highlands at Hilltop was structured with a normal property tax levy on the land and a payment-in-lieu-of-taxes (PILOT) on the buildings. Unlike property taxes, PILOT revenues go entirely to municipal coffers–they do not have to be shared with Essex County or the Board of Education. Martin has said that the Hilltop will produce $1.5 million in PILOT money annually.

But the Hilltop does not generate that much money now, and Council member Kevin Ryan pointed out the money it does generate is already being used in the budget. Ryan noted that the 2013 budget assumes that we will get just $326,000 in Hilltop PILOT money in 2013. Last year, we budgeted for $301,385 in Hilltop money, but got $326,443, which was used.

“The Hilltop will increase our annual cost of debt service by approximately $250,000 for the next 20 years,” Ryan said after the meeting. “This is why it is crucial for me to have an accurate projection of pilot revenue from the Hilltop for the same time period. Martin’s continual statements that no tax dollars will be used, while technically accurate in a narrow sense, does not provide a clear picture of the possible impact on the budgets going forward. He also tries to go the impression that the PILOT money was somehow intended to be spent this way. I don’t doubt for a minute that back when the Hilltop Master Plan was discussed this was considered, but times have changed economically. We could simply let the PILOT revenue be applied to offsetting ongoing costs, which would offset the need to raise some of the additional revenues needed through raising property taxes or maybe it could be used to pay down some of our existing bond debt. Our projected bond debt payment for 2013 is in excess of $2.4 million. This does not include anything for the Hilltop.”

Joseph Faccone, a partner at Samuel Klein & Company, the accounting firm that Verona uses, said he is anticipating a 2.5% interest rate on the bond issue. It will follow a so-called conforming schedule, which means that the debt costs will be the same every year for the life of the project. Martin noted that some municipalities opt for non-conforming schedules to keep costs artificially low in the initial years of a project.

Martin also said that Verona would not need to make a downpayment on the project because downpayments are waived on projects that are within the bounds of an area in need of redevelopment. That, however, is a designation that the Council must make, and it has not done so yet. Martin said it would be unlikely for Verona to get grant money for the fields because the early Hilltop work got Green Acres funding.

Council member Jay Sniatkowski asked what the new fields would add to Verona’s debt load. Martin said that Verona has $29 million in debt outstanding, which gives us a debt load of 1.26%. The new fields will take us to 1.5%, far below the 3.5% allowed by the state. “I know there is a limit and I want to make sure we are significantly below it,” Sniatkowski said.
- Advertisement -

Council member Michael Nochimson asked whether some of Verona’s existing debt could be refinanced at a lower rate. Under the rules of the state’s Local Finance Board, the savings must be at least 3% for the bond to be callable. Martin said that Verona normally looks at its debt three times a year to see whether bonds should be called and asked Faccone to present some options for the existing debt and projected field costs at the next Council meeting.

In the public comments portion of the meeting, Verona Environmental Commission Chairman Gerard Shimonaski again asked Martin to provide the VEC with the construction documents for the field project. One of the key duties of the VEC is to review construction plans for their impact on Verona’s environment. Shimonaski’s request received another terse rejection from Martin, who insisted that the VEC must have someone explain the field plan to them. “This is silly,” Sniatkowski interjected. “Just give them the site plan. This is nonsense. You guys have the right to look at it.” (Full disclosure: This reporter is a VEC member.)

Resident Denise Verzella questioned the timing of the plan, which comes as the BOE is considering a major referendum that will also cover field improvements. “There are other alternatives that we can look at first,” she said.

The vote on the field spending will take place at the Town Council’s April 15 meeting.