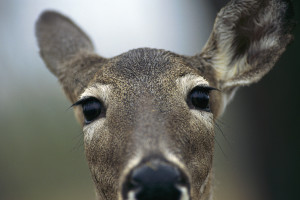 Anti-culling activists insist there are economical and effective non-lethal alternatives to control local deer populations. A previous letter explored the high cost ($3,000+ per deer) and low effectiveness of immuno-contraceptives like GonaCon. Surgical sterilization (either tubal ligation or ovariectomy) would be less expensive (~$1,800 per deer) and far more effective – however, given New Jersey’s current regulations, neither method is operationally feasible.

Under statute N.J.S.A. 23:4-42.4, a municipality wishing to conduct any kind of deer management program must first obtain a community-based deer management program permit from the DEP. Imbedded in this statute’s language is the requirement for prior written consent from surrounding landowners if access to their property might be needed to implement the program. This requirement doesn’t really impact sharpshooting programs like the County’s, where deer are either killed on the spot or do not travel far before dying.

However, per the DEP, any method involving tranquilization via mobile dart gun requires written permission from every property owner within 2,000 feet of the dart site. This is because in theory a darted deer could run for up to 1/3 of a mile and enter private property before succumbing, and program participants would need access to that property in order to retrieve the deer. As the rule stands today, if just one homeowner within 2,000 feet of a potential dart site refuses to give his/her consent – in advance – the DEP will not grant a permit.

Drop-netting or box-trapping could be used instead, but they are inefficient and expensive capture methods, risk injury and/or trauma to the deer, and are non-selective (meaning non-target deer can wander in). Nets and traps are also subject to interference and vandalism. Mobile tranquilization is needed to keep costs down and maximize the number of deer that can be captured and treated within the program timeframe.

Lastly, as the 2,000-foot restriction is essentially the radius of a circle, any potential program area must be almost 300 acres in size and devoid of houses to avoid the prior written permission requirement – and even then the program could only be implemented on land farther than 2,000 feet from any surrounding private property. Most tracts in Essex County do not meet that size requirement, and the few that do would have program activities limited to just the acreage at their center. Since deer tend to prefer edge habitat rather than deep forest, it is very unlikely that an immuno-contraception or surgical sterilization program could successfully treat the 90+% of female deer needed to reduce, or even stabilize, the herds in the County’s reservations.

To my knowledge no other state has such legal impediments to using mobile tranquilization. If anti-culling activists are sincere about finding a non-lethal deer control alternative, they would do well to focus their efforts on amending New Jersey’s 2,000-foot prior written permission rule.