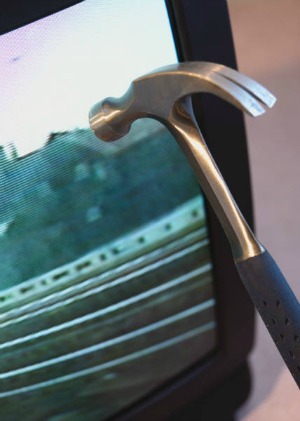 Budget review season is beginning in Verona, and there are a series of workshops planned to explain different aspects of municipal spending in Verona. But unless you can get to Town Hall in person to find out what the numbers are, you’re going to be out of luck: Town Manager Joe Martin again declined to put the meetings on Verona’s public access television channel VTV.

“It stifles discussion and invites grandstanding,” Martin said at the Town Council meeting last night. Mayor Frank Sapienza and Deputy Mayor Bob Manley said during the meeting that they were also opposed to televising the budget workshops.

[CLARIFICATION: Manley’s position was ambiguous. When initially asked by Sapienza whether he wanted to comment on Councilman Kevin Ryan’s request to televise the workshops, Manley responded, “No”. Later, in the public participation part of the meeting, he was asked by Al DeOld to clarify his position. Manley responded, “Quite honestly, I have no strong feeling either way. At times, I do feel that when it is televised, I’m a bit more confined to my statements, less free than I would like to be. Quite honestly, Al, I’m not thrilled that these are televised. I have no strong feeling one way or the other.” Lori Ruzich, a resident, also pressed Manley, and he said, “I didn’t say I wish they weren’t. I just said I’m not thrilled that they are.”]

The decision did not sit well with Council member Kevin Ryan. “I take umbrage at the suggestion that because the cameras are on, someone will play to the audience,” he said.

Resident Lori Ruzich also took issue with the decision. “We want to hear what’s going on,” she said. “There is no logical reason to not put it on television.” Ruzich noted that her husband is often unable to make Council meeting because he travels for work, but he wants to be able to listen to the meeting and e-mail his comments.

The schedule for VTV, which broadcasts Verona events like the Town Council meeting on FIOS channel 24 and Comcast channel 35, is more accessible now than it has been in the past. The town publishes the broadcast schedule on its Web site.

But to take advantage of that, residents have to be near a television in Verona, or have set their home DVRs to record, which is something that few people do. Recent statistics on TV and Internet video viewing make it clear that more people are watching video online than on their TV sets. The Verona Board of Education has been posting the videos of its meetings to YouTube since last August. Some meetings have gotten more than 100 views–significantly more people than attend the average BOE meeting in person.

The New Jersey Open Public Meetings Act says that the public has the right “of access” to state and local government meetings and that the public must be notified of those meetings in advance. The Act does not mandate television or video recording, but it does not prohibit this recording, either. What’s more, existing New Jersey law on recording public meetings allows citizens to make sound and video recordings of public meetings.

The federal government has had a YouTube channel since 2009, and the video site has set up a tutorial to teach governments how to use its services. Some government entities have taken things a step further with live streaming, which means that they are sending their meetings out as Web video as they happen. The state of Maryland uses live streaming, as do the cities of Philadelphia, Oakland, Calif. and Evanston, Ill., among others. In San Antonio, Texas, viewers of live government Webcasts have been able to text in their questions for politicians during the meetings. Web sites like GovLoop have even sprung up to teach government entities how to use all this technology.

The first of the budget workshops will be held on Monday, February 25, at 7 p.m. in the Council Chambers of Verona Town Hall. The police, recreation and community services budgets will be under discussion.

UPDATE: Councilman Jay Sniatkowski, who was not able to attend last night’s meeting, contacted us to say that he supports the broadcasting of the budget workshops. He said he would be contacting the town manager to see what could be done to make that happen.