Long Hearing, No Vote Yet 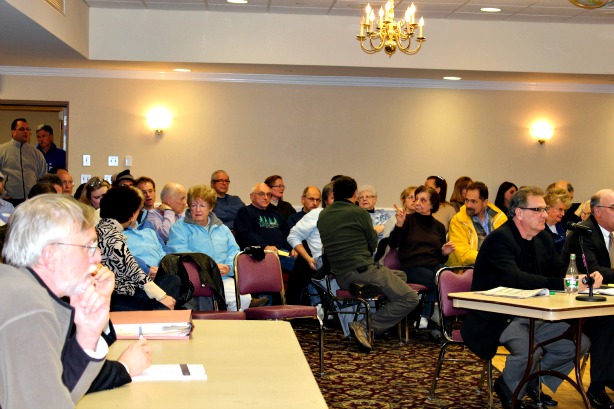 The ballroom at the Verona Community Center was packed and residents kept up a steady, decorous procession to the microphone until long into the night.

The words varied from speaker to speaker but the message to the Verona Board of Adjustment was the same: Say “no” to the plans for a mixed-use development at the eastern end of Bloomfield Avenue.

“It is a great deal for a developer who wants to overbuild and a lousy deal for the neighborhood,” said Bob Detore, who served 12 years as a Town Council member and mayor of Verona in the past. “It doesn’t mean that there is nothing good,” Detore added, likening the current discussion to the issues that surrounded the original plans for the Hilltop development in the 1990s. “It means that there is a deal to be worked out.”

But whatever the Board of Adjustment will work out on the project proposed by Sparta-based developed DMH2 LLC will have to wait until at least Thursday. A planner who had represented some of the residents adjacent to the two properties–176 and 200 Bloomfield Avenue– was unable to attend due to a family emergency. The board also wanted to hear testimony to changes that DMH2 now wants to make to the cutting of trees on the property. The hearing adjourned at 10:45 to Thursday night.

The Board of Adjustment allows neighbors to any project to weigh in with their concerns, and weigh in they did last night. Mary Purcell, whose Westview Road home is just 24 inches from the property line of the two DMH2 parcels, was the first. She told the board that she fears for her health during the blasting and that she will not be able to enjoy her home. “This project is too long, too invasive, and too destructive,” she said. “I feel this project should be denied.”

Many of those who spoke questioned whether DMH2 had, in its testimony, proven that its project would provide substantial benefit to Verona, a key criteria in the granting of variances. DMH2 needs five variances to carry out its project as planned. “It is not an inherently beneficial project that adds to the town,” said Jessica Pearson, who lives on Montclair Avenue.

The potential impact of the project on Bloomfield Avenue traffic and the road’s underlying infrastructure was also raised. Montclair Avenue resident Gerard Tamburino wondered how the Verona Police Department would manage traffic in the area during construction, while Alex Roman, who is running for Town Council, asked the Board of Adjustment to consider the damage that might be done to the improvements that have been made to Bloomfield Avenue by heavy construction equipment. He said that fully loaded trucks, as those exiting the construction site are likely to be as they carry away rock debris, have been known to cause road asphalt to sink.

There was also concern that Everett Field, the key field for youth baseball and football in Verona, might be rendered unplayable by the dust during the redevelopment work, particularly for children with asthma. “Will we be able to play baseball when blasting is going on?” asked Palma Quagliata, whose sons have played baseball there.

Barry Shatz, a Claremont Avenue resident, urged DMH2 owner Dennis Handel, to consider alternatives. “Two single-family homes would be acceptable to me and most of the people in the neighborhood, and it would allow the applicant to still make a profit,” he said.

Though there was little interaction between DMH2’s lawyer and the residents, board members did ask for clarification and additional comments on several points. But it was hard to ascertain which way the board might be leaning on the project. “Not everything that has come before this board has been approved,” cautioned long-time board member Michael Zichelli, noting that the board has been taken to court over its decisions, and lost. “I don’t think anybody should assume that this is a slam dunk yes or a slam dunk no.”