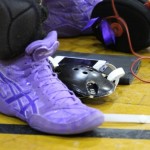 Yes, Mark Riggio pinned August Rosenberger of Bloomfield in 5:15 last night, but that’s probably not what made him happiest about the match. At Riggio’s urging, the Verona High School and Bloomfield wrestling teams had set up last night’s match as a fundraiser for Alzheimer’s and the two teams raised $1,200.

There was lots of purple in the VHS gym last night, from the T-shirts on fans in the stands to the purple socks on the wrestlers and Riggio’s own bright purple wrestling shoes. Purple has become the signature color of the effort to raise awareness about Alzheimer’s, which claimed Riggio’s grandmother last year.

Bloomfield captured the match, 40 to 36. Verona was without the strengths of Frank Greco and Joe Cordasco, but there key wins by several underclassmen. Junior Quinn Cummings, wrestling at 220, hoisted opponent Tommy Vigna overhead in the opening seconds of their match and quickly pinned him, to a roar of approval from the home crowd. Nick Esposito defeated Ed Millan and Paul Scully vanquished Anthony Frascati, both wins by pin.

VHS is back on the mat tonight against Woodbridge at home. The meet was shifted from Friday, which holds the promise of a large snow storm.