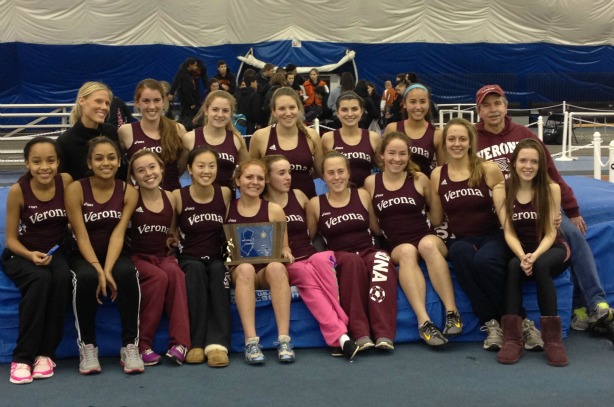 Ashley set meet records in both the 400m and 55m with respective 59.8 and 7.56 performances. She also won the 800m but failed to break her own meet record in this race after someone accidentally walked into her on the final turn.

Kelsey Attamante was fourth in the 800m with a time of 2:28.5, followed closely by teammate Sarah Conboy at 2:30.4. The 1600m relay team of Kelsey Attamante, Angel Barkley, Marybeth Grund and Julia Ashley was second in 4:23.6.

Gabriela Mercurio finished third in pole-vault with a jump of 8’6″ and Jordan Seubert got a sixth place in the event. Marybeth Grund was fourth in the 55m hurdles, and the team also received points from the following sixth-place finishes: Colleen Farrell in the 55m, Laura Williams in high-jump and Diana Moczula in shot-put.

The team had a total of 73 points followed by Hasbrouck Heights with 53 points. The State Group Championship meet will be Saturday, February 16, in Toms River.