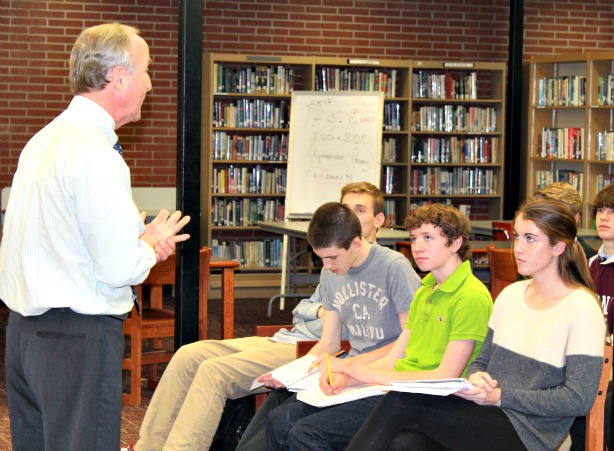 Gun control, military spending, immigration, healthcare, yes, even the GOP and women: It was all on the table when Rep. Rodney Frelinghuysen came to Verona High School this afternoon.

Frelinghuysen, a Republican who became Verona’s representative to Congress in a redistricting last year, visited VHS to meet with Christopher Tamburro’s 10th grade U.S. History students.  And after he briefly introduced himself and the seven-day-a-week job he holds, Frelinghuysen opened the floor to them.

Do you think Congress fights too much, one student wanted to know. Frelinghuysen, who comes from a family that has served in Congress pretty much since there was a Congress, was sanguine. “When you have 435 people who are opinionated, sometimes agreeing on things can be difficult,” he responded, before offering this tip to any budding politicians in the audience: “Don’t irritate people from California, they can out-vote you.” Frelinghuysen also told students that, “despite what you hear about us [Congress], there’s a dedicated group of people there.” 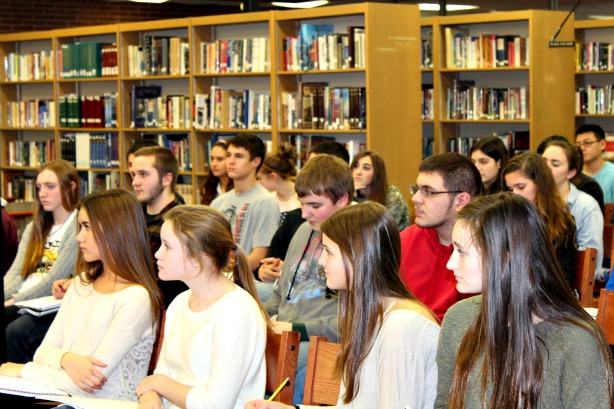 The students pulled no punches in their questions and Frelinghuysen was similarly forthright. Asked about gun control in the wake of the Newtown, Conn. elementary school shooting,  he said that all guns ought to be registered and that existing gun laws must be enforced. Asked whether the U.S. should drill for oil in the Arctic National Wildlife Refuge, the chairman of the House Subcommittee on Energy and Water Development said no, but added that he does support the construction of the Keystone Pipeline, which will bring Canadian crude oil to the Midwest. “Will the budget ever be balanced,” Bill Ferrari wanted to know. “It will take a heck of a long time,” said Frelinghuysen.

Kyle Kazanfer wanted to hear the congressman’s thoughts on what has been dubbed the GOP’s war on women, which Kazanfer noted had cost the party votes. “Are there some Republicans who said some pretty stupid things?” Frelinghuysen asked rhetorically. “Yes. It was embarrassing to me.”

Tyler Petersen wanted to know about cuts to military spending. (On January 3, President Barack Obama signed a $633 billion defense bill that contains cuts agreed upon with congressional Republicans in August 2011.) “We need to be careful before we reduce the size of our military,” said Frelinghuysen, a Viet Nam war veteran.

Issues aside, it was clear that the most important aspect to Frelinghuysen’s visit was simply to get students engaged in the workings of their government. He talked about how to get involved in politics, whether that’s on the Republicans’ side of the aisle or the Democrats’. “I think it’s best to be engaged,” the Congressman said. “Nobody has a monopoly on being right. We want educated voters.”

If you want to have your own conversation with Rep. Frelinghuysen, he’ll be at the Rescue Squad’s pancake breakfast before the Super Bowl this Sunday. 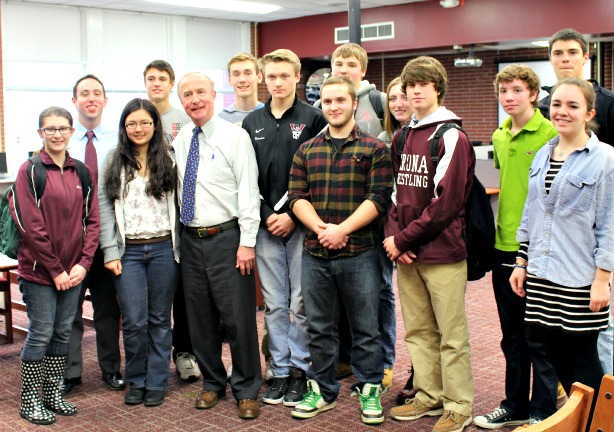