Sandy Aid: Nice, But No Katrina 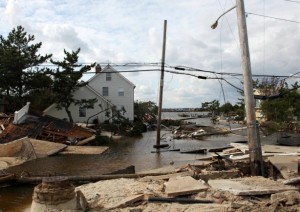 The U.S. House of Representatives has approved $50.7 billion more in aid for Hurricane Sandy victims yesterday and the Senate is considering similar action. The funds might help Jersey Shore home and business owners, like those from Verona, get a start on rebuilding. But Joseph J. Seneca, a professor at Rutgers University’s Edward J. Bloustein School of Planning and Public Policy, says the funds won’t have the same impact on New Jersey’s economy that the Hurricane Katrina aid had on Louisiana.

That’s because the extra aid won’t offset what the state is going to be losing in taxes. According to a new report by Seneca, New Jersey lost $11.7 billion of state GDP in the aftermath of Hurricane Sandy. It also doesn’t help that unemployment remains high in New Jersey, as does our deficit.

There’s a full analysis of what the reconstruction aid will and won’t do on NJSpotlight.com and you can read it here.