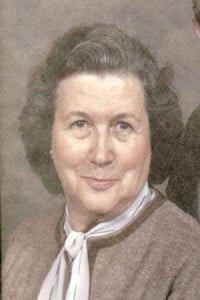 Born in Waltham, Mass., Mrs. Lehman lived in Verona for 63 years prior to moving to West Caldwell in 2008.

A member of Calvary Lutheran Church since 1944, Mrs. Lehman was active in the Women’s Guild, Altar Guild, Friday Fellowship and served as a Greeter and head of the Prayer Chain.

In lieu of flowers, donations to the Calvary Lutheran Church would be appreciated.