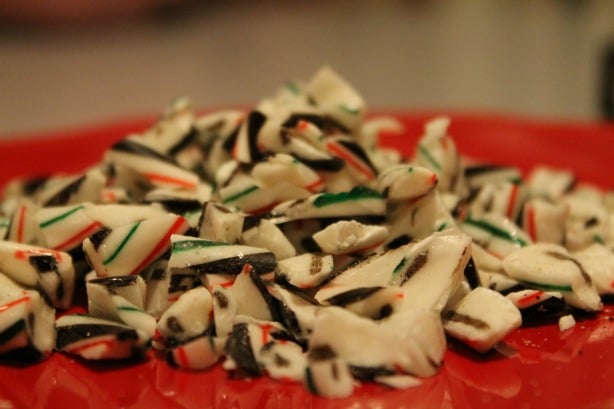 When I told my sister that I was making Peppermint Stick ice cream, I think I heard her jaw drop on the other end of the phone. As kids, this was one of our favorites, right along with Bubblegum. Frequent patrons of the Carvel ice cream store that used to be in Upper Montclair, we both loved this flavor and now miss it.

I’ve asked around, and the local ice cream stores don’t have it as one of their seasonal flavors. Edy’s makes it seasonally, but like pumpkin ice cream, once the season is over, the containers leave the shelves. Either way, I thought it would be more fun to make my own. I started thinking about this during the summer and had only been waiting for candy cames to arrive in the stores. And arrive, they did– just in time for Christmas. So I bought two flavors: regular peppermint and chocolate peppermint. I chose the chocolate ones because well, I believe that just about everything is made better with chocolate.

So, now that Christmas is over and I’ve got plenty of candy canes, it’s time to break them up and make my favorite ice cream!

Place sugar in a large bowl and add milk.

Mix with a wire whisk until sugar dissolves.

Pour into the freezer bowl of an ice cream maker and turn machine on.

After about 25 minutes, add the candy canes and continue mixing for another 5 minutes.

Place ice cream in a larger container and freeze for another 2 hours to make it more solid. 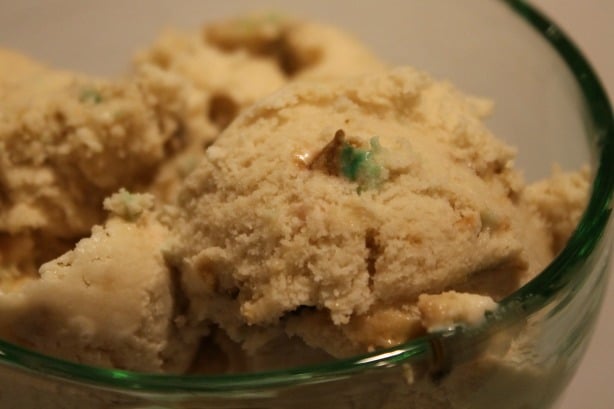 Because these candycanes were chocolate pepprmint, the final color has a chocolatey brown tint to it, so it doesn’t look exactly like what I devoured as a child. However, the flavor is amazing.

If you’re feeling nostalgic and also enjoyed Peppermint Stick ice cream as a child, let the finished ice cream sit in the freezer for 24 hours. That will soften the pieces of candy cane around the edges, but still leave it crunchy in the center.

*To crush candy canes, place them in a zippered plastic bag and use the bottom of a heavy drinking glass to crush them into small pieces. This is a great activity for kids!

Want to try my other ice cream recipes? Click here. Want to try my Maroon & White ice cream, created to honor the colors of Verona’s public schools? It’s an exclusive to “Cook It Verona”, our cookbook.  You can become a Supporting Reader and get the e-reader version of the cookbook for free, or buy it as a softcover or hardcover cookbook.