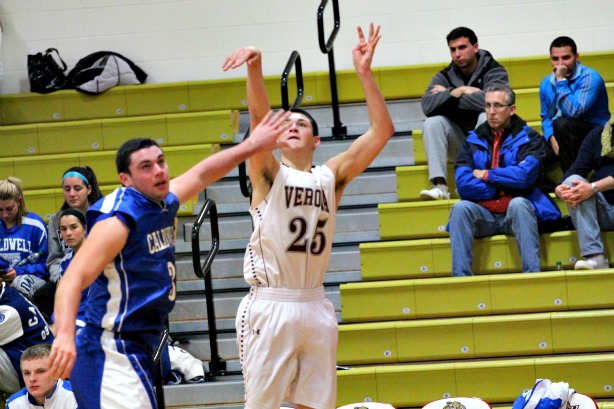 Alex Kaslander led the Verona High School boys basketball team to a 49-38 victory over Caldwell in the finals of the Essex County Holiday Classic.

Kaslander put up 21 points in the game, which Verona pretty much dominated from start to finish. Among Verona’s other high scorers, Luke Weiss contributed 10 points and eight rebounds, while Matt Braschi, who had led the team in the semi-final win over West Essex, had nine points and five rebounds. Caldwell’s leading scorer was Sean Nastelon, with eight points.

The two teams will play again at Caldwell on Thursday, January 3 at 4:40 p.m.

Verona’s lady hoopsters rallied from a loss against West Essex in the tournament opener to edge out Cedar Grove 45-43 in their second tournament game.

Senior Amanda Langan was key to the win, with 24 points and 12 rebounds on the game. Julie Rosenberg, a junior, added 11 points to the Verona victory. Candace Mitola was the high scorer for Cedar Grove with 17 points.

The Verona girls have a break until Saturday, January 5, when they face Livingston High School. The away game starts at 10:30 a.m.