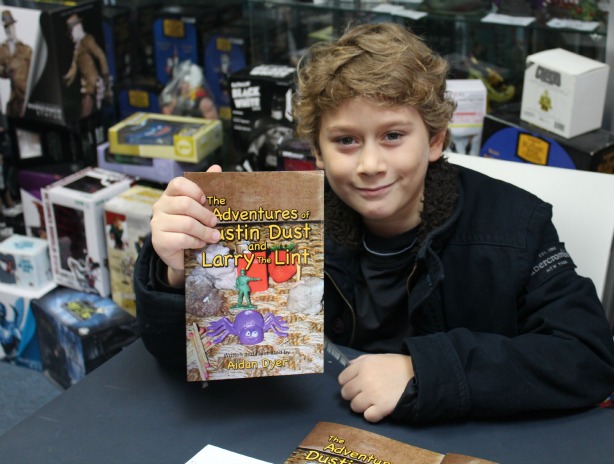 Aidan Dyer is a fourth-grade student, and a published author. That would be unusual enough were it not for one additional fact: Dyer is dyslexic.

On Saturday, December 15, Dyer held a signing for his book, The Adventures of Dustin Dust and Larry Lint, at Time Warp Comics. His teachers from Brookdale Elementary School were there, as were a clutch of parents and students who wanted to learn how Dyer turned his learning style to his advantage. 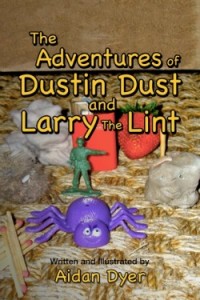 Why turn to book writing when there is so much other writing to do in elementary school? Simple, says Dyer: “I wanted to do it.”

The Adventures of Dustin Dust and Larry Lint is an action/adventure tale that takes place sort of at kids’ eye level. We won’t spoil the plot, but let’s just say that it involves some common household objects coming alive. Dyer wrote the book, and illustrated it, in the summer before third grade with his tutor, but it took all of the last school year to get it published.

“He read parts of it last year to the class,” said Kelly Flynn, Dyer’s third-grade teacher at Brookdale, who was at the book signing with fourth-grade teacher Lauren Till and Claire Duffy, Brookdale’s learning specialist and a certified Orton-Gillingham instructor. “It was exciting for the kids.”

And not just at Brookdale. Dyer, who has lived and traveled in Africa, has already done a book tour to Forest Avenue school, where he was peppered with questions about writing by a dyslexic student there. Children Having Learning Differences (C.H.I.L.D.), the Verona non-profit that supports children with learning challenges and their teachers, is looking into organizing an author visit to all of the Verona elementary schools and perhaps even the middle school so that Dyer can talk to other students who have difficulty reading.

“There was a little boy from Montclair who was particularly interested, and Aidan spent a lot of time talking with him,” said his mom, MariaElena Dyer, after the book signing,” and another boy with dyslexia. I think Aidan and his book have already touched and inspired many students who struggle with reading and writing.”

If you missed the book signing, you can buy your copy for $10.95 here. Oh, and you better read fast: Dyer already has an idea for his next book.